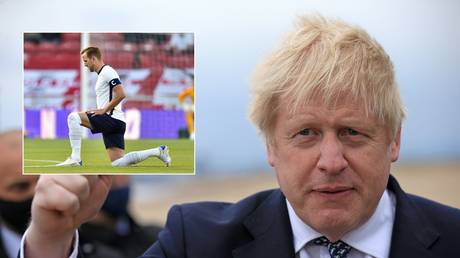 Boris Johnson says players who take the knee should be supported. © Reuters

UK Prime Minister Boris Johnson has waded into the row about players taking a knee before games in the European Championships, as he calls on English fans to avoid booing and pay respect to the gesture.

The recent return of fans to football stadiums in the United Kingdom has been welcomed in all quarters after more than a year of empty, cavernous arenas providing a muted soundtrack to the beautiful game – but the supporters’ comeback has brought with it a new debate about the efficacy of the ‘taking a knee’ gesture which has been commonplace in English football since last summer.

England’s recent double-header of international friendlies in Middlesbrough’s Riverside Stadium was notable for the cacophony of jeering from fans which met Gareth Southgate’s team’s pre-match gesture in support of racial equality, a move which provoked ire from within the camp and emboldened the English boss to announce that his team would knee before every game in the European Championships regardless of any opposition in the stands.

And now Boris Johnson, who had previously refused to condemn the jeering supporters, has doubled-back and called on English fans to be respectful of Southgate and his side’s decision to not back down to the boo boys.

“The prime minister respects the right of all people to peacefully protest and make their feelings known about injustices,” said Johnson’s official spokesperson.

“The prime minister wants to see everybody getting behind the team to cheer them on, not boo.”

England will take on Croatia on Sunday in their opening fixture in the tournament but Southgate insists that his team are united in their motivation to take the knee – but says that the message isn’t intended to be a political one but rather stark opposition to racial inequality and discrimination.

Look, if the players want to take the knee and fans want to boo, then they are both free to do so.Now let’s get back to the football. Who does everyone think should be starting upfront on the left alongside Kane and Foden? I personally think it should be Sterling for his pace.

If the players are going to take a knee, then supporters have every right to show their disapproval of them doing so.

Isn’t this message about the systemic racism in our society actually more directed at Downing Street and those in power who can change the system for the better, rather than football fans anyway?

Southgate indicated that he has “a responsibility to the wider community to use my voice, and so do the players” in an open letter to England supporters published in The Players’ Tribune.

Read more:   Ministry of Defense holds extended session of Board on results of year and upcoming tasks in 2019

“It’s their duty to continue to interact with the public on matters such as equality, inclusivity and racial injustice, while using the power of their voices to help put debates on the table, raise awareness and educate,” he added.

A recent poll commissioned by YouGov found that a majority of England fans are in favor of taking a knee in support of the Black Lives Matter campaign, suggesting that those who disagree are a (very) vocal minority.

Scotland, meanwhile, who are one of England’s Group D opponents, announced this week that their players will no take a knee before their fixtures and will instead “stand up against racism” – in a scene which is sure to provide a fitting contrast to what has become an increasingly polarizing issue.

Also on rt.com ‘I’ll be rooting against England then’: Anti-BLM fans pleased by news Croatia will NOT take knee in Euro 2020 clash

“Look, if the players want to take the knee and fans want to boo, then they are both free to do so,” one fan summed up on social media.

“If the players are going to take a knee, then supporters have every right to show their disapproval of them doing so,” added another, while a third suggested that issues such as this fall under the remit of Boris Johnson and 10 Downing Street rather than professional athletes.

“Isn’t this message about the systemic racism in our society actually more directed at Downing Street and those in power who can change the system for the better, rather than football fans anyway?” they wrote. (RT)

NATO is ‘provoking conflict’ in Black Sea, top Russian diplomat warns, saying confrontation could be on cards over naval drills