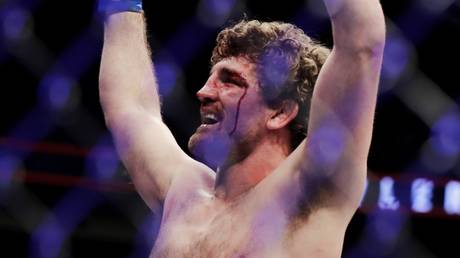 Former Bellator and ONE Championship welterweight world champion Ben Askren has announced his retirement from MMA following his latest stint in the UFC.

Askren announced his retirement on Ariel Helwani’s MMA Show on ESPN on Monday as he called time on his decade-long career in mixed martial arts.

The former NCAA Division I amateur wrestling standout earned a spot on the United States Olympic team earlier in his career before transitioning to MMA and becoming a dominant force at 170 pounds as he used his prodigious ability on the mats, along with an ever-evolving submission game, to go undefeated for 10 years.

Also on rt.com ‘Most overrated fighter of all time’: Ben Askren roasted after defeat to Demian Maia at UFC Singapore

That run saw him capture the welterweight titles in both Bellator and ONE Championship as he became one of the best 170-pound fighters outside of the UFC.

But that nagging question of how he might do in the octagon was finally answered when he was signed by the UFC following his retirement from ONE Championship as part of an historic “trade” that saw Demetrious Johnson leave the UFC to join ONE.

Read more:   Coronavirus: US now nation with most Covid-19 cases

Askren’s debut was a thrilling one, as he produced a come-from-behind performance to defeat former UFC welterweight champion Robbie Lawler, after which he taunted the rest of the division by remarking: “Hey Dana (White)! Is that really the best you’ve got?”

Askren then went on to face Jorge Masvidal at UFC 239 during International Fight Week in July 2019, where his unbeaten run was spectacularly halted by Masvidal’s flying knee after just five seconds for the fastest knockout in UFC history.

And, most recently, Askren lost to Demian Maia in their battle of elite MMA grapplers at UFC Singapore.

After back-to-back losses in the octagon, many wondered what Askren’s next move would be, and now it has been revealed, with Askren confirming his retirement.

“I’m retiring from the sport of mixed martial arts. I’m retired from everything,” he said.

“I’ve been having hip problems, and I finally had the discussion with my doctor. I actually got the MRI before my last fight, and I need a hip replacement.

“Man, that’s it for me. I’ve been thinking about this for a week and what I was going to say. I’ve been filled with gratitude for how great of a career I’ve been able to have, even though obviously in the end, it did not go my way.”

His detractors will point to his UFC stint as evidence that he wasn’t ever one of the best welterweights in the world, but Askren takes a different view as he assessed his career. (RT)