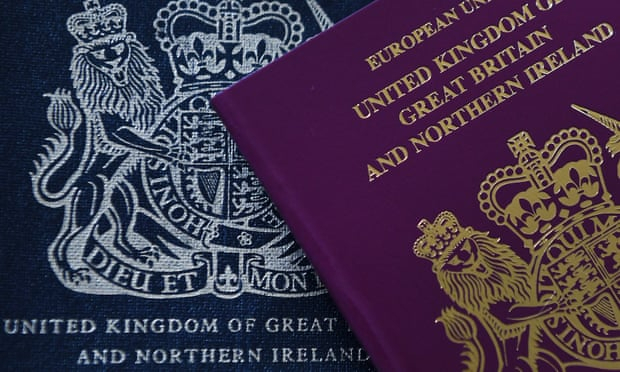 Blue passports will be issued for the first time in almost three decades from next month to mark Britain’s departure from the EU, the government has announced, the Guardian reports.

They will replace the standard-issue burgundy passports that were rolled out across EU countries from 1988.

The home secretary, Priti Patel, welcomed the switch back to blue, but pro-European campaigners and nationalist politicians in Northern Ireland predicted the new passports would result in Britons entering the slow lane at airports and ports throughout the EU.

The Home Office says the blue passport will be “the greenest British passport ever”. A spokesperson said: “The carbon footprint produced through manufacture will be reduced to net zero, through projects such as planting trees.”

It is also promoting the passport as the most technologically advanced. The spokesperson said there was “a raft of new and updated security features, including a hard-wearing, super-strength polycarbonate data page, which contains innovative technologies embedded into the document, to keep personal data secure”.

The new-look passport incorporates the latest and most secure printing and design techniques, the spokesperson said, which would offer better protection against identity theft and fraud.

The home secretary’s enthusiasm was not shared by the European Movement. Edward McMillan-Scott, the group’s patron and an MEP for 30 years, said the blue passport would be seen as offensive to many Europeans.

“It will be seen as a symbol of the attitude prevailing in the Conservative party towards the rest of Europe that is isolationist, ignorant and self-destructive,” he said.

McMillan-Scott said recent scenes captured on Twitter of long queues at passport control in Amsterdam’s Schipol airport involving British tourists were “only the precursor for what is to come with these passports”.

He said: “When I was an MEP, I remember being given a special blue pass that was meant to make it easier for me to pass through border checks on my way to Brussels and Strasbourg. It was more hassle than it was worth because some border officials weren’t sure what the document was and we got held up with endless checks.

“So I threw it away and started using my normal burgundy-coloured UK passport – the same colour as everyone else passing through the EU. Without doubt this marking out of British passport holders by having another colour will make life uncomfortable, especially for the millions travelling to the EU.”

Claire Hanna, the pro-European Social Democratic and Labour MP for Belfast South, said: “The fact that this is being lauded as a big win sums up Brexit. The colour changes but the opportunity and potential has been restricted. In this case, blue will represent economic harm and limited horizons for the passport holder, and that is a crying shame.”