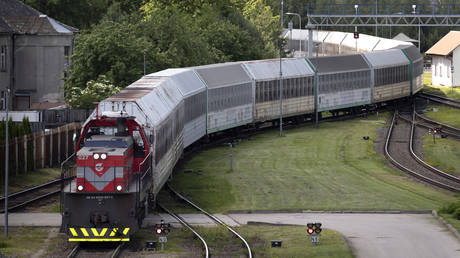 Cargo trains from the Russian enclave of Kaliningrad move to the border railway station in Kybartai in Lithuania. © AP / Mindaugas Kulbis

Transit of sanctioned goods to the Russian exclave could resume within days, unnamed European officials tell Reuters Cargo trains from the Russian enclave of Kaliningrad move to the border railway station in Kybartai in Lithuania. © AP / Mindaugas Kulbis

Lithuania could lift its restrictions on goods passing by rail between mainland Russia and its western exclave of Kaliningrad as soon as early July, unnamed European officials told Reuters on Wednesday.

Moscow and the EU have been locked in a feud since June 17, when Vilnius moved to suspend the transit of sanctioned goods between Kaliningrad and the rest of Russia. The Lithuanian authorities said they were acting on instructions from Brussels, and in line with restrictions imposed on Moscow over the conflict in Ukraine. The ban left Russia with only sea routes to supply its small, but well-armed, exclave sandwiched between Lithuania and Poland.

The sources told the agency that it’s proving hard for Europe to maintain its strict sanctions while also avoiding further escalation with Russia. As a result, European officials are in talks on exempting Kaliningrad from the sanctions, potentially paving a way for a deal in the coming days. 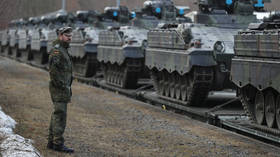 Germany weighs in on NATO plans for Eastern Europe

According to the officials, Lithuania fears that if the blockade remains, Moscow could use force to create a land corridor through its territory connecting the exclave with the rest of Russia. (RT)