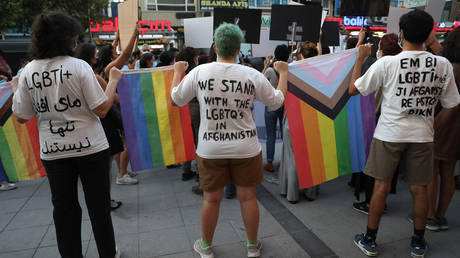 US Secretary of State Antony Blinken denied accusations of a botched retreat from Afghanistan, blaming the Trump administration for any failures and saying Washington is focused on protecting LGBTQ and other vulnerable Afghans.

“Thank you for rightly putting the spotlight on concerns about the LGBTQI+ community in Afghanistan and the particular threat that they find themselves under,” Blinken told US Representative David Cicilline (D-Rhode Island) on Monday in a House hearing on the Afghan withdrawal.

This is something that we are focused on.

.@SecBlinken: “The LGBTQI community in Afghanistan … is something that we’re focused on.” pic.twitter.com/RJgitvJAI9

It’s not clear how Blinken intends to protect LGBTQ and other vulnerable Afghans, as the Taliban retook control of Afghanistan even before the Biden administration could complete its exit. The administration on Monday announced $64 million in new humanitarian assistance to Afghanistan, saying the money will be routed to charities and UN agencies to avoid letting it get into the hands of the Taliban.

USAID, led by notable interventionist Samantha Power, will send the money through nongovernmental organizations to “provide life-saving support directly to Afghans facing the compounding effects of insecurity, conflict, recurring natural disasters and the Covid-19 pandemic,” according to the announcement.

Blinken implied that the US has some level of leverage over the Taliban, even while acknowledging that the Islamist group has prevented some Americans and US allies from leaving the country on charter flights.

Secretary Blinken just acknowledged the Taliban has blocked charter flights out of Afghanistan, with Americans still there trying to get out. We’re in a hostage crisis. And today Joe Biden is campaigning in California.

“We expect the Taliban to ensure freedom of travel, to make good on its commitments on counter-terrorism, to uphold the basic rights of the Afghan people – including women, girls and minorities – to name a broadly representative permanent government,” the secretary said. “The legitimacy and support the Taliban seeks from the international community will depend on its conduct.” (RT)