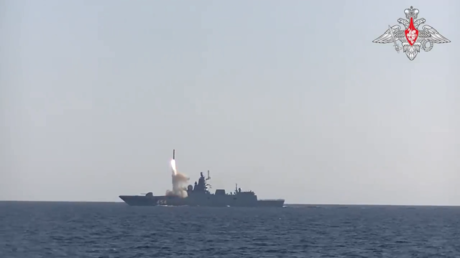 July has been a remarkable month for Russian rockets, with Moscow announcing a handful of successful missile tests, the country showing off its warplanes at the MAKS international airshow, and launching the new Nauka space module.

Bringing together arms manufacturers from across the country and customers from across the world, the annual MAKS air show, outside the capital, saw the unveiling of the new Su-75 light combat aircraft, codenamed Checkmate. By all accounts, the presentation of the new fifth-generation light fighter jet was the pinnacle of the exposition, with developers promising Checkmate would make its maiden flight before next year’s event.

The jet, its makers hope, has the chance to become a future bestseller worldwide. In effect, there are no advanced light aircraft on the market right now. America’s F-35 Lightning II is a capable fighter, but it’s expensive, relatively heavy, and most importantly, “politically charged,” given relations so often dictate exports. All that makes Russia’s Checkmate an interesting buy for a number of regions, such as parts of Asia and Africa – and even Latin America.

The promotional video that came with the new aircraft featured the UAE, India, Vietnam, and Argentina. All look like appropriate prospective buyers, especially in light of reports about a potential joint Russian-Emirati project that has been rumored for a number of years. In addition, the Su-57, a fifth-generation fighter designed for the Russian Aerospace Forces, has now entered serial production. However, there remains the need to step up manufacturing and deliver these aircraft to the forces at a faster pace, but some of its technological solutions will be used to speed up work on Checkmate.

The military aircraft were not the only newsmakers. The civil aviation industry had something to show off with its Sukhoi Superjet and MC-21 projects. Work on them continues, and one particular area of improvement is localization. Even though they lack major international contracts, the Russian market has enough opportunities for both of them. Interestingly, not a word was said about the Russian-Chinese project that focuses on developing the CR929 wide-body aircraft, intended to challenge the dominance of the EU and US over the market. At the same time, Boeing and Airbus both actively participated in the air show with their civil aviation projects.

Secondly, the Russian Defense Ministry released a series of statements that made for an interesting backdrop for MAKS. The first featured a video of a successful test launch of a Zircon anti-ship hypersonic cruise missile.

Talk at the show suggested there would be another launch in the near future – this time, at the maximum range (1000+ km), and the target would be an aircraft carrier.

Although this missile is not going to become the primary striking power of the Russian Navy, which celebrated its 325th anniversary over the weekend, it does, however, have great potential when it comes to guaranteeing the destruction of the most important and secure targets both at sea and on land.