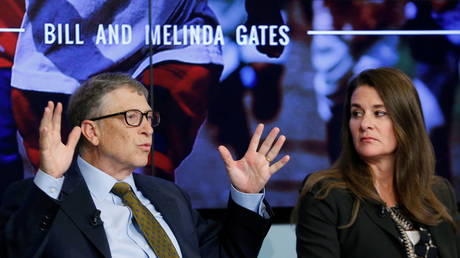 FILE PHOTO: Bill Gates is shown with his then-wife, Melinda Gates, at a January 2015 conference in Brussels. © Reuters / Francois Lenoir

Software billionaire Bill Gates got perhaps more than he bargained for in a PBS interview when the host apparently caught him off guard with questions concerning his relationship with deceased pedophile Jeffrey Epstein.

After a series of questions that enabled the Microsoft co-founder to pontificate about such pet issues as Covid-19 vaccines and climate change, host Judy Woodruff shifted gears in Tuesday night’s interview and asked Gates about his ties to Epstein, who allegedly committed suicide in jail in August 2019. Woodruff began by asking Gates what he knew about Epstein when he began meeting with him in 2011 – three years after the billionaire financier had been convicted of soliciting prostitution from a child.

“You know, I had dinners with him,” Gates said while appearing to fiddle with the finger where he wore a wedding ring prior to his divorce last month from Melinda Gates. “I regret doing that. He had relationships with people he said would give to global health, which is an interest that I have.”

Gates added that the meetings were “a mistake,” saying, “They didn’t result in, uh, what he purported, and I cut them off. You know, that goes back a long time ago now, you know, so there’s nothing new on that.”

Read more:   Turkey says will not stop refugees who 'want to go to Europe'

Woodruff continued to press Gates, pointing out that the meetings went on for several years and asking what he did when he found out about Epstein’s notorious background.

Gates shook his head, then said with a shrug, “Well, you know, I’ve said I regretted having those dinners, and there’s absolutely nothing new on that.” (RT)