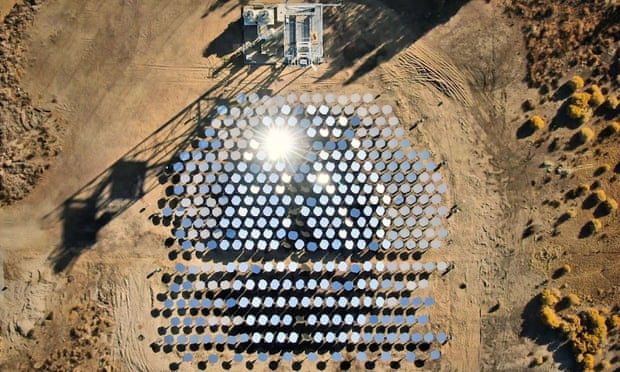 Bill Gates is backing a new venture which aims to turn sunlight into a source of heat exceeding 1,000C that could help replace fossil fuels.

The world’s richest man is joining investors behind Heliogen, the first company to concentrate sunlight to reach temperatures that are high enough to power heavy industry without carbon emissions.

The technology could even reach temperatures of 1,500C to split hydrogen particles from water to create a fossil-free gas to warm homes, fuel cars and power factories.

Bill Gross, the chief executive and founder of California-based Heliogen, said the company represents a technological leap forward in tackling the emissions from industry and transport that make up 75% of the world’s carbon footprint.

The company uses software to align a large array of mirrors to reflect sunlight to a target, creating a source of heat almost three times as intense as previous commercial solar systems.

Cement is the world’s third largest source of emissions behind oil and coal, and its production is expected to boom due to urbanisation in developing countries and economic growth.

If allowed to continue unchecked, cement production would pose a major threat to the targets set by the Paris agreement, which aims to limit rising temperatures to 1.5C above pre-industrial levels.

Heliogen has the backing of private equity investors and entrepreneurs who believe its technology could help the most polluting industries to cut their carbon emissions.

Gates said he was pleased to be an initial backer of a “promising development in the quest to one day replace fossil fuel”.

“Today, industrial processes like those used to make cement, steel, and other materials are responsible for more than a fifth of all emissions,” he added. “These materials are everywhere in our lives but we don’t have any proven breakthroughs that will give us affordable, zero-carbon versions of them. If we’re going to get to zero carbon emissions overall, we have a lot of inventing to do.”