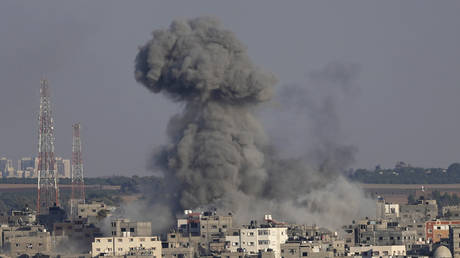 The US leader has welcomed a ceasefire between Israel and Gaza militants Smoke rises after Israeli airstrikes on a residential building in Gaza, Sunday, Aug. 7, 2022 © AP / Adel Hana

President Joe Biden has praised Israel for defending its people and saving “countless lives” during three days of tit-for-tat strikes, which left the leadership of the Palestinian Islamic Jihad (PIJ) decimated and dozens of Palestinians dead. A shaky truce in Gaza came into effect at 11:30pm local time on Sunday.

“My support for Israel’s security is long-standing and unwavering — including its right to defend itself against attacks,” the US leader said in a statement on Sunday night, as the ceasefire appeared to be holding despite a hectic start.

Just minutes after the truce went into effect, several rockets were reportedly fired from Gaza and intercepted by the Israeli defenses. Nobody took responsibility for the attack and the IDF reported no strikes in response.

“Over these recent days, Israel has defended its people from indiscriminate rocket attacks launched by the terrorist group Palestinian Islamic Jihad, and the United States is proud of our support for Israel’s Iron-Dome, which intercepted hundreds of rockets and saved countless lives,” Biden added. (RT)