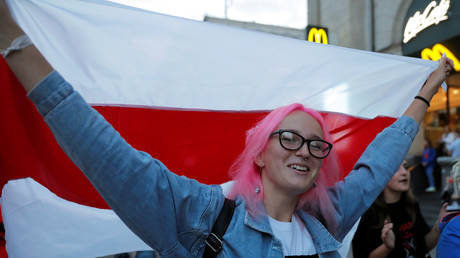 Democrat candidate for US president Joe Biden has called for regime change in Minsk, denouncing President Alexander Lukashenko’s “brutal dictatorship” and vowing to sanction his “henchmen” until there’s a “democratic Belarus.”

“I continue to stand with the people of Belarus and support their democratic aspirations,” Biden said, claiming that President Donald Trump “refuses to speak out on their behalf.”

Biden: the people of Belarus have peacefully protested to demand an end to the brutal dictatorship of Alexander Lukashenka.. Although President Trump refuses to speak out on their behalf, I continue to stand with the people of #Belarus & support their democratic aspirations.. pic.twitter.com/OKQkDlpmCN

Biden said that “No leader who tortures his own people can ever claim legitimacy” and demanded that “the international community should significantly expand its sanctions on Lukashenka’s henchmen and freeze the offshore accounts where they keep their stolen wealth.”

The Belarus statement was among a flurry of press releases by Biden’s campaign on Tuesday, and a rare foray into the subject of foreign policy. The Democrat has generally avoided the subject during the campaign, focusing his attacks on Trump on the Covid-19 pandemic.

Lukashenko, who has been president since 1994, claimed a convincing victory in the August 9 election. Opposition politician Svetlana Tikhanovskaya, whom Biden endorsed in the statement, officially received about 10 percent of the vote. She has since fled to the neighboring Lithuania and reached out to EU countries for support, calling for a general strike to pressure Lukashenko into annulling the election they claim was “rigged.”

Police in Belarus forcefully dispersed demonstrations on Sunday. Footage of the clashes was shared and amplified by activists working for NATO-adjacent think tanks, prompting some Biden supporters on Sunday to demand “a plan for Belarus.”

Biden needs a plan for Belarus. This cannot be tolerated. https://t.co/vySSzdHAaL

While the EU, UK and Canada have imposed sanctions on Belarussian officials and openly sided with Tikhanovskaya in denouncing the “rigged” election, the Trump administration has been more diplomatic. (RT)