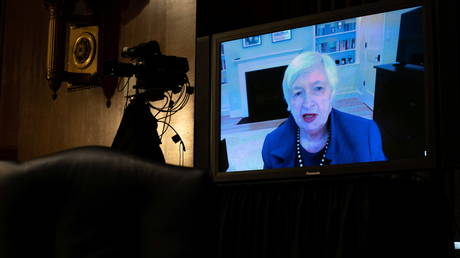 Janet Yellen, Biden’s pick to lead the Treasury Department, has been urged by the Democrats to sanction the US’ adversaries even more aggressively than the Trump administration. She said she already has her sights set on China.

In a Senate Finance Committee hearing on Tuesday, Yellen spoke in favor of ?joe Biden’s proposed “fair and progressive tax code,” which Republicans have warned would raise the tax burden on the US’ already squeezed middle class. She also spoke of the need to “go big” with economic stimulus and unemployment benefits.

However, Yellen was also urged to “go big” in exercising the Treasury Department’s power to sanction the US’ foreign adversaries. “The Trump administration failed to be as aggressive on sanctions,” Washington Senator Maria Cantwell (D-WA) claimed, before telling Yellen, “I want to be sure you use that as an economic tool.” (RT)

19:52 France backs AstraZeneca Covid jab for older recipients, but only 24% of available doses have been administered

19:30 Fans laugh off David Beckham’s suggestion that he could attract Messi & Ronaldo to MLS

19:13 ‘World has never seen this much wealth created in just one year’

19:03 EU announces new package of sanctions against four Russian officials over jailing of Navalny, as Moscow pledges to respond in kind