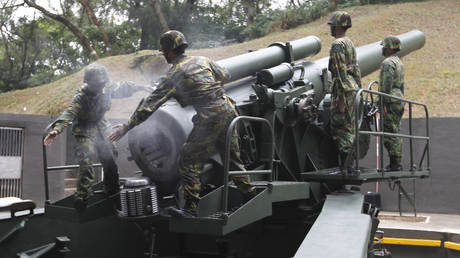 FILE PHOTO: Taiwanese soldiers operate a US-made Howitzer during a military drill on Nangan in the Matsu archipelago, off northern Taiwan, May 8, 2013. ©  Reuters / Pichi Chuang

The US State Department authorized a $750 million arms sale to Taiwan, President Joe Biden’s first weapons transfer to the island following a flurry of deals under his predecessor – all over vocal objections from Beijing.

Announced Wednesday, the proposed sale involves 40 155mm self-propelled artillery guns and related gear, a number of vehicles and machine guns, as well as nearly 1,700 precision guidance kits used to convert ‘dumb’ projectiles into GPS-guided munitions, according to a State Department notice to Congress.

The administration claimed the sale would serve “US national, economic and security interests” by supporting Taipei’s “continuing efforts to modernize its armed forces and maintain a credible defensive capability,” as well as “assist in maintaining political stability” in the region.

Also on rt.com ‘Biggest destroyer of peace’: China lashes out after US Navy warship sails through Taiwan Strait for SEVENTH time under Biden

Congress has 30 days to challenge the sale – which must also be finalized with arms contractor BAE Systems – though lawmakers typically do not attempt to block transfers to Taiwan.

While former President Donald Trump oversaw at least $18.2 billion in weapons and equipment sales to the island – including two massive transfers for $2 billion and $8 billion in 2019 – Wednesday’s deal is the first under Biden. China is likely to slam the move, having done so repeatedly through the Trump years. (RT)