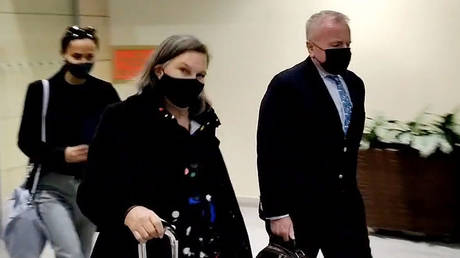 US Under Secretary of State Victoria Nuland, in center, and US Ambassador to Russia John Sullivan are seen at the Domodedovo International Airport, Moscow region, Russia. © Sputnik

Victoria Nuland, US President Joe Biden’s envoy for European and Eurasian affairs, is in Moscow as part of an unprecedented, yet highly symbolic, move, with Russia waiving sanctions against her to allow the meeting to go ahead.

Nuland is well-known on this side of the world for her uncompromising criticisms of Russia and her active role in the mid-2010s events that took place in Ukraine. She had been entered onto a blacklist and barred from crossing the border. The sanctions were lifted reciprocally: Russia let Nuland in, and Washington gave the green light for one of Moscow’s diplomats stuck in a similar position.

While it’s good to see it all work out in the end, it is a fairly baffling case. In the past, diplomats could do their jobs without their respective capitals needing to strike deals and make concessions. Centuries of rules and norms seem to have been ignored.

Also on rt.com ‘The Americans aren’t listening to us,’ Russia says as major Moscow talks between Biden’s envoy and Kremlin’s diplomats break down

These are strange times indeed, and I often think that during the Cold War things were somewhat easier. Back then, everyone seemed to have a clearer awareness of responsibility to keep the channels of communication open to make sure you could know what the other country was up to. Today, posturing and rhetoric take precedence.

In Russia, Nuland is close to a legend. Captured on camera while handing out cookies to Ukraine’s Euromaidan protesters in 2014, she became the personification of Washington’s foreign policy in the region. In reality, her role has likely been blown out of proportion. Nuland, married to prominent neoconservative thinker Robert Kagan, must have a particular worldview and genuinely believe in promoting democracy and combating perceived Russian imperialism.

However, first and foremost, she’s an experienced and competent diplomat toeing the official line. Currently, as we can see, the approach is businesslike and pragmatic, and this visit was meant to help the White House pursue the specific goals that it’s working towards.

Nuland’s push to visit Moscow is likely driven by the Biden administration’s attempt to gauge the chances for a real and risky escalation between Russia and Ukraine. It is simply not in the interest of the White House for such a conflict to happen, given Washington has a list of other priorities.

Priority number one – far ahead of anything else – is to contain China. The US-China relations keep deteriorating, while the tensions, or at least the intensity of showdowns, keep rising.

The focus is again on Taiwan, arguably the most explosive issue and the only one on the agenda with Beijing that could genuinely lead to a war. With no solution in sight, both countries are gearing up for a long-term full-scale standoff.

This does not mean, though, that Russia has been pushed to the back burner. The Pentagon often shares concerns over Russia’s military prowess. The upshot was strategic consultations in Geneva, launched after the meeting between Biden and Russian President Vladimir Putin.

However, in many aspects, Russia is seen through the lens of the US-China confrontation, including in those areas where it could emerge as a distraction.

Apparently, President Biden and his administration are seeking to secure the Russia–Ukraine status quo, avoiding escalation, especially when it comes to Donbass. I would even go as far as to say the White House is ready to exercise its leverage with Kiev, particularly since President Volodymyr Zelensky’s recent change of political character has come as a surprise even to the US, which had high hopes for him as a liberal reformer. 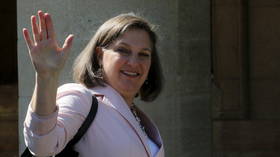 In the meantime, political developments in Kiev are picking up pace. Zelensky is fixated with consolidating his personal power and cracking down on numerous centres of influence, which until recently has been a notorious and persistent trend in Ukrainian politics.

However, without a strong footing, he has embarked on building a complex system based on bluff. He is appealing to the West, exploiting it as a bogeyman for domestic tycoons, on a promise to fight corruption with Washington’s assistance. He is also teasing Russia, because the “Russian threat” can force the West to back Kiev despite any tangible progress in the fight against corruption, at least in the form that would make Washington happy.

Read more:   EU elections: Left and right win at the expense of the centre

It is a shaky and risky venture. It is risky because this rationale might prompt you to escalate the Donbass crisis purely for domestic considerations. Russia does not have too much thick skin, either. Judging by the publications of Russian leaders, Putin’s op-ed on shared historical routes over the summer and former president Dmitry Medvedev’s recent criticism of rising nationalism, the Kremlin has got only so much patience.

This is unnerving for Washington, let alone the fact that it has been tired of Ukraine for quite some time. Victoria Nuland knows the ins and outs of Ukrainian politics and the quality of its leadership like nobody else. Deep mistrust of Russia, combined with skepticism towards the capacity of Kiev’s elites, is pushing the US towards some kind of a failsafe system.

Over the last 10 months in the White House, the Biden administration has shown consistency in matters that it cares for, a big advantage over its predecessor. Also, when it deems necessary it can ignore ideological burdens (unlike all post-Cold War administrations – from Clinton to Obama) – or rather, set them aside for the time being. (RT)