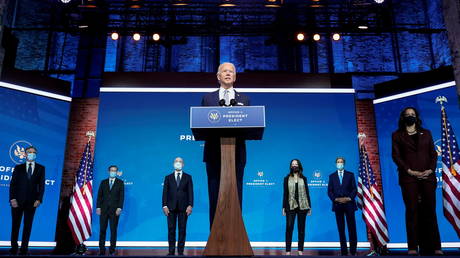 In a speech introducing his national security team made up of Obama-era officials, Joe Biden glossed over their past misadventures to boast of their qualifications and woke credentials – adding they are “ready to lead the world.”

“America is back. Ready to lead the world, not retreat from it,” Biden declared on Tuesday, flanked by running mate Kamala Harris and his new security team. Biden’s six security specialists all served in the Obama administration in some capacity, and Biden’s speech suggested that his administration would pick up where Barack Obama left off.

Biden promised a departure from President Donald Trump’s “America First” brand of isolationism, vowing to assert US dominance “both in the Pacific as well as the Atlantic. All across the world.”

Biden’s picks all cut their teeth during Barack Obama’s two terms in the White House. However, in a move reflective of his party’s recent ‘woke’ turn, Biden chose to highlight their racial and gender identities when introducing them.

“We’re going to have the first woman lead the intelligence community,” he boasted. “The first Latino, an immigrant, to lead the Department of Homeland Security, and a groundbreaking diplomat at the United Nations,” he added, the latter a reference to Thomas-Greenfield, who is black.

Also on rt.com Biden’s getting the Obama band back together again for an encore performance celebrating nostalgia for a never-was golden age

This identity politics, coupled with appeals to his nominees’ credentials, was the order of the day for Biden. Prospective State Secretary Tony Blinken, for example, was introduced as a man who “strengthened America’s alliances” and led “diplomatic efforts in the fight against ISIS,” and as a man who comes from a family of “immigrants and refugees and a Holocaust survivor.”

Blinken’s concrete achievements, had Biden highlighted them, would have sounded less groundbreaking. Blinken advocated for the Iraq War and the bombing of Libya and Yemen, and still calls for a return to arming rebels in Syria. He orchestrated the bombing of Serbia in 1999, called for the US to arm Ukraine against Russia, and is ambiguous on China, alternately demanding that the democratic world unite to confront Beijing, and earning praise from Chinese state media.

Similarly, Alejandro Mayorkas was described as both a consummate professional who would rid the Homeland Security Department of the “chaos, dysfunction and absolute cruelty” of the Trump administration, and “an immigrant, a Latino who knows we are a nation of laws and values.” However, while Mayorkas has been lauded by liberals for championing a path to citizenship for immigrants, he also occupied the number two spot at the department as the Obama administration detained and caged children, and deported more immigrants than any other administration in US history.

The conflict between reality and Biden’s brand of icy professionalism in woke wrapping continued when he introduced Avril Haines as the “first woman ever” to lead the intelligence community and a “fierce advocate for telling the truth.” (RT)