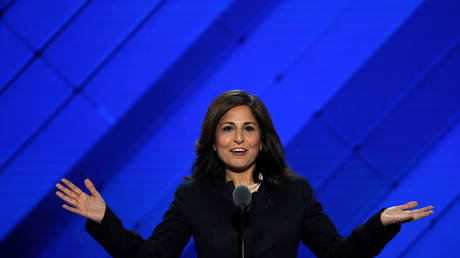 An Obamacare architect, former Hillary Clinton adviser and career Russiagater, Neera Tanden, has been tapped as potential budget office director under Biden, setting Twitter on fire with recollections of her toxic track record.

Tanden was a healthcare adviser under the Barack Obama administration and helped draft his brainchild the Affordable Care Act. A close ally of Hillary Clinton during her unsuccessful 2016 presidential run, she currently heads the pro-Clinton think tank Center for American Progress. Although born and raised in the United States, Tanden’s parents are immigrants from India.

The mainstream media have praised her potentially becoming “the first woman of color and the first South Asian American to lead the Office of Management and Budget.”

Known for her combative tweeting, Tanden seems to have a habit of clashing with anyone who questions the wisdom of the Democratic Party’s political machine.

Journalist Vincent Bevins joked that her potential nomination should be seen as an inspiration which “shows that a lifetime of posting cringe is not a barrier to higher office.”

Grayzone writer and assistant editor Ben Norton labelled Tanden a “neoliberal troll” who “hates the left with a burning passion and spends all her time on here attacking leftists.” In fact, Tanden was openly hostile towards supporters of Vermont senator and two-time presidential hopeful Bernie Sanders. The left-leaning lawmaker accused Tanden last year of “maligning my staff & supporters and belittling progressive ideas.”

Her hostility towards those critical of Clinton reportedly even led to physical scuffles. In 2008, Tanden is said to have assaulted a staffer after he asked Clinton a critical question about the Iraq war.

Conservative pundit Mike Cernovich described Tanden as a “garden variety resistance troll,” although this description arguably doesn’t do justice to her impressive output of Russiagate-related outbursts.

She was a militant disciple of the debunked theory that Donald Trump’s presidential campaign was in cahoots with Moscow, floating countless bizarre allegations, including, but certainly not limited to, the proposition that Russian hackers had infiltrated Florida’s voting system with Trump’s full knowledge during the 2016 election.

Her foreign policy views have also raised eyebrows. She (in)famously suggested Libya should provide compensation, in the form of oil, to the US as a means of repayment for its “liberation.” A US-led NATO intervention in 2011 turned the North African nation into a safe haven for warlords, terrorists and human traffickers.

“Given tonight’s news, I hope oil-rich countries around the world are increasing the security on their rigs and drilling sites,” journalist Glenn Greenwald quipped, citing an email of Tanden’s that was leaked to the Intercept.

Given tonight’s news, I hope oil-rich countries around the world are increasing the security on their rigs and drilling sites: https://t.co/oN8KCtW7DUpic.twitter.com/dEc5mkEs77

Beijing has said it will impose sanctions on US officials for “performing badly” over Taiwan,…

Delphine d’Amarzit, number 2 of the online bank Orange Bank, will take the head of…

Turkish National Defense Minister Hulusi Akar is on an official visit to Iraq, according to…