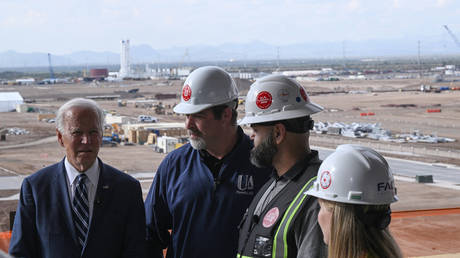 US President Joe Biden is visiting Phoenix to promote his government’s CHIPS Act, aimed at subsidizing the manufacture of computer chips domestically, he told reporters as he prepared to board Air Force One on the White House lawn on Tuesday.

Asked why he was not including a stop at the beleaguered Customs and Border Protection office on his itinerary in Arizona, Biden told the reporter “there are more important things going on” than that agency’s work. “They are going to invest billions of dollars in a new enterprise in the state,” Biden explained.

The bipartisan CHIPS Act was enacted in August, in an effort to address China’s grip over the US electronics supply chain, particularly with regard to advanced computing technology.

Meanwhile, the US has set a record for illegal border crossings in fiscal year 2022, with over 2.3 million people apprehended trying to enter the country in the 12-month period ending September 30. That represented an increase of 1.7 million over 2021. 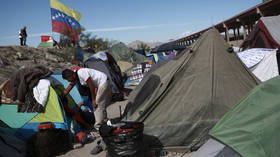 Arizona declared an emergency at the southern border in April 2021, arguing state and local law enforcement were “overwhelmed” trying to maintain order and pledging to send hundreds of National Guard troops to back them up. In addition to stepped up security and more funding for detention centers, then-Governor Doug Ducey pleaded with the Biden administration for help.

While CBP records about 6,000 people trying to cross into the US via the southern border every day, that figure is soon expected to soar as high as 18,000 or even 30,000 per day pending US District Court Judge Emmet Sullivan’s reversal of the Trump administration’s Title 42 policy, which allowed for the speedy removal of migrants on public health grounds while they awaited the adjudication of their asylum claims.

Thousands of migrants are reportedly camped out in Mexican border cities preparing to apply for asylum en masse once the 15 Republican-led states currently filing a legal challenge to the Title 42 repeal have seen their legal options exhausted. (RT)