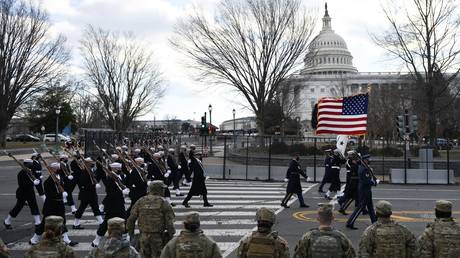 Security forces look over parade troops during the inauguration of Joe Biden as the 46th US president in Washington DC, January 20, 2021. ©  REUTERS/Brandon Bell

US President Joe Biden’s first proclamation in office was to declare his inauguration day a ‘National Day of Unity,’ calling on all Americans to join him in “democracy” – and defeating the ‘domestic terrorism’ of his opponents.

Minutes after settling into the White House on Wednesday, Biden sent out the proclamation which rehashed the key points of his inaugural address, verbatim.

In issuing the proclamation, Biden invited Americans to “join together and write the next story of our democracy – an American story, of decency and dignity, of love and of healing, and of greatness and of goodness.”

NEW: Pres. Biden issues proclamation declaring today “a National Day of Unity,” and calling “upon the people of our Nation to join together and write the next story of our democracy.” https://t.co/ERkvXPaOnl#InaugurationDaypic.twitter.com/sBQMZOjCIs

The newly sworn-in president called unity the “beating heart of a democracy” needed to “restore the soul of America,” which is threatened by an economic crisis, a pandemic, “calls for racial justice some 400 years in the making” and a “climate crisis with force and fury.”

We also feel the rise in political extremism and domestic terrorism – unleashed just days ago on our Capitol, the citadel of freedom, but brewing long before – that we must confront and defeat.

This was a reference to supporters of former President Donald Trump, some of whom stormed the Capitol two weeks ago in protest of Congress certifying Biden’s election despite Trump’s claims of irregularities and fraud in several states, which the mainstream and social media suppressed and courts rejected on technical grounds. (RT)