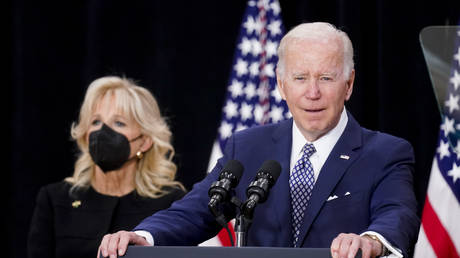 President Joe Biden on Tuesday condemned the racially-motivated attack on a supermarket in Buffalo, New York, as “simple and straightforward terrorism,” and condemned the shooter’s racist worldview.

Biden spoke in Buffalo after meeting with the families of the 10 shoppers and employees slain by a teenage gunman at a grocery store on Saturday. The gunman, who was captured alive, live-streamed his rampage and posted a 180-page manifesto online detailing his white supremacist views. Three others were injured, and 11 of the 13 shot in total were black.

“We have to refuse to live in a country where black people going about a weekly grocery shop can be gunned down by weapons of war deployed in a racist cause,” Biden declared, with “weapons of war” referring to the AR-15 style rifle used by the gunman.

“What happened here is simple and straightforward,” he continued. “Terrorism. Domestic terrorism” (RT)