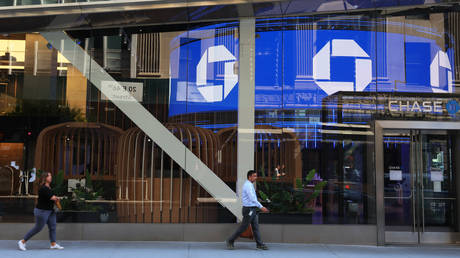 The White House is trying to maintain sanctions pressure while avoiding “a global economic catastrophe,” the agency says People walk past a Chase Bank in New York City. © AFP / Michael A. Santiago

The Biden administration is privately urging leading US banks like JPMorgan Chase and Citigroup to continue doing business with strategic Russian firms despite sanctions imposed on Moscow over the conflict in Ukraine, people familiar with the issue told Bloomberg.

Such requests have been made by the Treasury and State Departments as the US government is trying to keep pressure on Russia, but at the same time avoid “a global economic catastrophe,” the news agency reported on Monday.

Washington has been asking for services such as US dollar settlements, payment transfers, and trade finance for Russian firms exempt from some aspects of the sanctions, including gas giant Gazprom and fertilizer producers Uralkali and PhosAgro, the sources said.

As a result, the largest American banks are currently being “caught in the push-pull” between the Biden administration and Congress, which insists on harsher measures against Moscow. 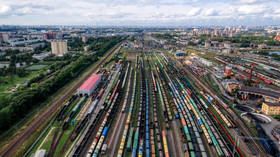 The sanctions prevent US banks from providing services to blacklisted entities and people, with violations punishable with multibillion-dollar fines.

Jamie Dimon the CEO of investment bank JPMorgan Chase was reportedly grilled at a congressional hearing in September over his company allegedly using loopholes in the sanctions regime to keep working with Russia. The banker responded by saying that “we are following the instructions of the American government as they asked us to do it.”

When addressed on the matter by Bloomberg, a Treasury spokesman said that it had issued guidance to banks, clarifying that activities in humanitarian aid, energy, and agriculture are authorized. JPMorgan and Citigroup have declined to comment.

“Congress needs to understand this – the US government has not imposed a comprehensive embargo with Russia, there’s still pockets of business that are allowed,” Nnedinma Ifudu Nweke, an attorney specializing in US economic sanctions at Akin Gump Strauss Hauer & Feld LLP, pointed out.

The Treasury “will continue to have meetings to educate banks on those pockets of allowable transactions, especially in the humanitarian space,” Nweke added. (RT)