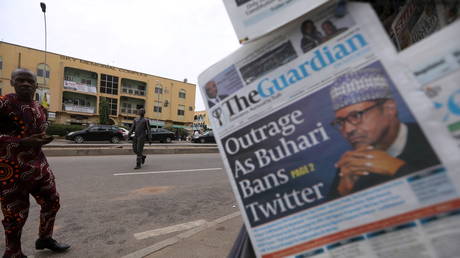 Arguing that freedom of expression was vital to democracy, the State Department urged Nigeria to reverse its suspension of Twitter, nearly a week after the African country banned the US-based platform for censoring its president.

“The United States condemns the ongoing suspension of Twitter by the Nigerian government and subsequent threats to arrest and prosecute Nigerians who use Twitter,” State Department spokesman Ned Price said on Thursday, adding that “unduly restricting” people’s right to “report, gather, and disseminate opinions and information has no place in a democracy.”

The United States condemns the ongoing suspension of Twitter by the Government of Nigeria. We call on the government to respect freedom of expression by reversing this suspension. https://t.co/bOkcgc2kDz

It was the first official reaction from the Biden administration on the issue, and comes almost a week after the government in Abuja announced a suspension of Twitter in Nigeria and a push to have all social platforms licensed through the National Broadcasting Commission, same as the legacy media.

Read more:   EU's Tusk to Boris Johnson: 'Where are you heading?'

However, the San Francisco-based service was quickly pilloried by critics who pointed out that Twitter literally censored then-sitting US president – it banned Donald Trump after the January 6 Capitol riot over concerns how his comments might be “received and interpreted” online and off – and many others. (RT)