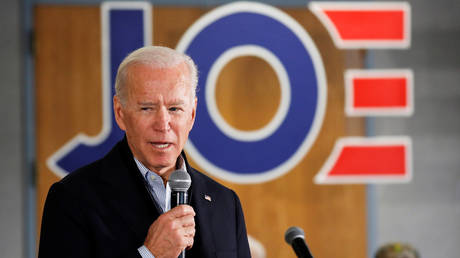 If there was one major lesson to be learned from Hillary Clinton’s failed campaign against Donald Trump, it would be a strategy of “I’m not him!” is a losing one – and yet, Joe Biden seems intent on following in her footsteps.

Attempting to capitalize on the ‘hot mic’ moment which revealed world leaders mocking Trump at this week’s NATO summit, Biden released a swiftly and slickly-produced ad portraying the US leader as the laughing stock of the world.

The world is laughing at President Trump. They see him for what he really is: dangerously incompetent and incapable of world leadership.We cannot give him four more years as commander in chief. pic.twitter.com/IR8K2k54YQ

The minute-long campaign spot features the now-viral clip of Canada’s Justin Trudeau making fun of Trump, accompanied by voiceovers of news anchors dismayed that “they’re laughing at him.” A collection of other embarrassing public moments follow as Biden’s voice is heard warning that the world sees Trump as “dangerously incompetent and incapable.” Written on screen at the end are the words: “We need a leader the world respects.”

Sound familiar? This exact tactic was employed repeatedly by Clinton to no avail, for the simple reason that zeroing in on Trump’s character flaws and lack of social graces doesn’t do anything to make Biden’s policy platform more attractive. It only indicates that his greatest selling point, apparently, is not being Donald Trump.

Also on rt.com Harris says US not ready for black woman president, but maybe even the Dems didn’t want more identity politics in a power suit

A 2017 study showed that Clinton’s own TV ads were “almost entirely policy-free.” Researchers wrote that focusing negatively on one’s opponent can have a “backlash effect” and that “personally-focused, trait-based negative messages” tend to be seen as less informative and less important than substantive policy-based messages. Clinton, they wrote, “overwhelmingly chose to focus on Trump’s personality and fitness for office” – a tactic which left “very little room” for convincing voters of why exactly she was the better choice. Trump, on the other hand, “provided explicit policy-based contrasts.”

One might assume that having seen this strategy fail before, Biden’s campaign might be inclined to try something new – but, in fairness, they don’t have a lot to work with. Like Clinton, Biden is playing the establishment-friendly, good ol’ electable moderate role. His middle-of-the-road policies are unlikely to fire voters up, so the best he can do is attempt to capitalize the anti-Trump anger of the comfortable classes – and ads like this one are the result.

The ad will no doubt be injurious to Trump’s own ego, but it won’t help Biden win over swing voters – and isn’t that supposed to be the whole point? Sixty-seconds of gloating might be effective with die-hard Democrats in the primary stages, but it certainly won’t force crucial undecideds off the fence – even if he manages to pull a Clinton and secure the nomination with help from establishment HQ. (RT)