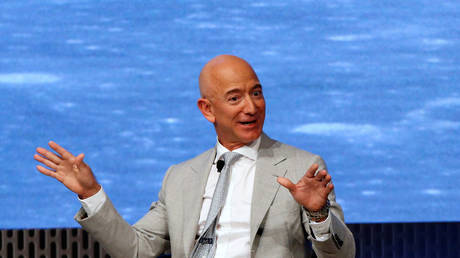 India’s anti-trust panel has launched a probe into Amazon and Walmart-run Flipkart amid claims they violated a competition law, as India’s traders group plans to stage mass protests when Amazon CEO Jeff Bezos arrives this week.

The world’s second richest person and Amazon CEO Jeff Bezos should hardly be counting on a red carpet welcome in India as he arrives in the country’s capital, New Delhi, later this week, with mass rallies and sit-ins being planned by the Confederation of All India Traders (CAIT) protesting what it argues are the online retail giant’s ‘predatory’ trade practices.

The CAIT, which represents some 70 million small traders and businesses, has called on its supporters to go on strike on Wednesday, when Bezos is set to touch down.

The group argues that retail giants such as Amazon and Walmart-owned Flipkart have been selling products at dumping prices, pushing local merchants out of business. The CAIT accused Amazon of trying to spin its vulture capitalism as something that can empower small traders, while peddling “a wrong and false narrative.”

Amazon is trying to create a false propaganda that it is the true friend of traders though it is the worst enemy.

Branding both US-based companies “economic terrorists” that pry on India’s small businesses, the CAIT asked for a meeting with PM Narendra Modi amid reports that Bezos has sought one himself. The association said its biggest rally would be held in front of Amazon India’s offices in Delhi, where Bezos is set to attend an event for small and medium-sized businesses.

The protest sentiment has been building up since late November, when supporters of CAIT and other trade organizations began hitting the streets to voice their outrage over the two e-commerce giants’ alleged violation of competition laws. (RT)