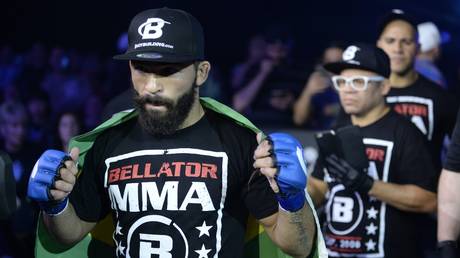 The ongoing coronavirus pandemic has claimed yet more sporting events, with the United States’ No. 2 MMA promotion Bellator MMA announcing the postponement of all three of its big-arena events in the month of May.

The shows, two in California and one in London, were scheduled to take place on the 9th, 16th and 29th of May but travel restrictions – as well as public health guidelines – have forced the promotion’s hand and compelled them to pull the plug.

The postponements come as little surprise given the current global health crisis, but also stand in stark contrast to the practices of both the UFC and the smaller European organization, Cage Warriors, who have persisted with their “the show must go on” policy throughout the early stages of the pandemic.

Read more:   Average monthly salary in Azerbaijan to grow by 5.7%

Cage Warriors ran a behind-closed-doors event in Manchester a little over a week ago, with the promotion being forced to uproot their show from London on the eve of the event due to public health concerns.

The UFC, meanwhile, has remained steadfast in their view that next month’s UFC 249 event will go ahead, despite its main event appearing to fall apart. Details regarding the event’s location and fight card remain a closely-guarded secret.

It is perhaps for these cold, hard logistical reasons that Bellator officials have decided that the easier (and more ethically safe) approach was to call a halt to the proposed shows and re-evaluate at a later date.

At this incredibly pivotal time in global health, Bellator Europe stars urge you to stay at home and save lives!#AloneTogetherpic.twitter.com/dvnrAb11z5

The promotion was also forced into postponing their recently scheduled Bellator 241 event, which was set to be headlined by a world title bout between featherweight champion Patricio “Pitbull” Freire and SBG Ireland’s Pedro Carvalho, though the company’s president Scott Coker was praised for paying everyone associated with the event, regardless of the cancellation.

“Just so you know, fighters were paid,” Coker said at the time.

“Officials were paid. Cutmen were paid. All of the producers, the lighting guys, everybody got paid. Nobody was shortchanged.”

While it is difficult to disagree with Coker’s decision to pull the plug, fight enthusiasts will be saddened when they look over the casualties of these three cards.

The promotion’s London card was to be headlined by a grudge match between brash Irishman James Gallagher and Cal Ellenor, but this has now been postponed for a THIRD time after both men suffered injuries in the lead-in to previously arranged bouts.