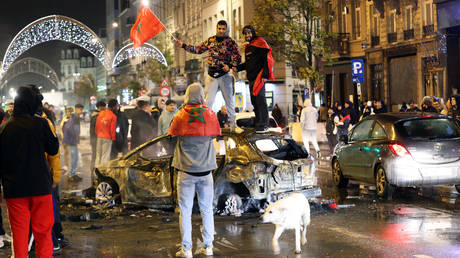 Brussels was among the cities to see rioting after Morocco defeated Belgium last week Cars were torched in the Belgian capital. © Dursun Aydemir / Anadolu Agency via Getty Images

Police in Brussels will be “vigilant and visible” ahead of crucial World Cup matches involving Belgium and Morocco on Thursday, a spokesperson has said.

Brussels was the scene of violence last weekend after Morocco fans celebrated their shock 2-0 victory over Belgium.

Police used tear gas and water cannons in their effort to curb the damage as Morocco fans smashed store windows and set fire to cars, according to AFP.

Unrest was also seen in Antwerp as well Dutch cities Amsterdam and Rotterdam.

Thursday sees a decisive round of World Cup Group F matches involving Belgium and Morocco, as they bid to reach the knockout stages in Qatar. 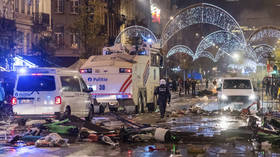 “We will be very vigilant and we will be visible from the start of the match with more police officers on the ground,” said Brussels police spokesperson Ilse Van de Keere, as quoted by Le Soir.

The Belgian outlet also reported that a “regional crisis center” will be activated, “so that all operations of the various police areas of the capital will be coordinated from there.”

Belgium take on Croatia on Thursday, knowing that their chances of making the last 16 are hanging by a thread.

Morocco face Canada and are better placed to qualify as they stand on four points from their two games thus far – level with Croatia in the Group F standings and one point ahead of Belgium.

Both matches get underway at 16:00 local time in Brussels. (RT)