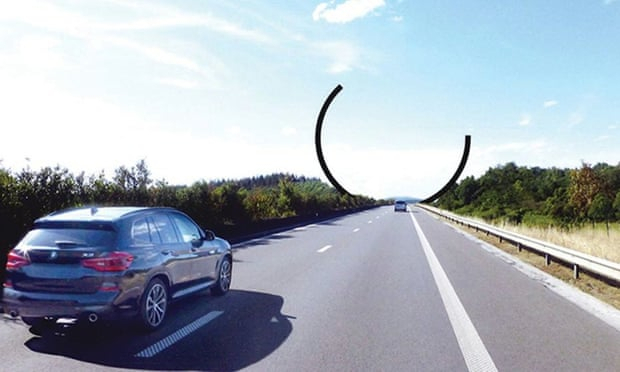 A Belgian motorway has been confirmed as the site of the EU’s tallest public artwork, which at 60 metres will be twice as high as the the statue of Jesus in Rio de Janeiro and taller than the Statue of Liberty.

Arc Majeur, an imposing 250-tonne steel structure, will stand over the busy E411 between the city of Namur and Luxembourg, a spot chosen partly on the basis that a driver’s view will be unencumbered by any lampposts.

The sculpture is not expected to be formally inaugurated until October but the installation of its main sections will take place from the late evening of 10 August to 6am the following morning, it has been announced.

The €2.5m arc, which is designed by the French artist Bernar Venet, has had a troubled history including two failed attempts to install it in France.

It was initially due to be erected in 1984 near the city of Auxerre along the A6 leading to Paris, only to fall foul of a campaign from a local politician despite the backing of the then French culture minister, Jack Lang.

Subsequent plans for the artwork to hover over a road in Burgundy came to nothing after Venet rejected a proposal from officials from the French highway company to paint it red.

The sculpture will be formed of two arcs, of 28 metres and 60 metres in height, emerging from the earth on either side of the highway near the village of Lavaux-Sainte-Anne on the outskirts of the Belgian city of Rochefort. About 1,000 tonnes of concrete will be used to keep it in place.

A spokesman for Venet said: “There are higher monuments in the world, but no bigger sculpture made by an artist. The Statue of Liberty without its pedestal is smaller and the Corcovado [the statue of Jesus Christ in Rio de Janeiro] is half the size.”

The UK’s tallest free standing artwork is the Aspire tower at the University of Nottingham’s Jubilee campus, which at 52 metres on top of a eight-metre concrete foundation is three times the size of Antony Gormley’s 20-metre-tall Angel of the North in Gateshead.

On the continent of Europe, the Arc Majeur will still be dwarfed by the Motherland monument in Ukraine, at 102 metres high, and the Sanctuary of Christ the King in Almada, Portugal, which is 110 metres tall.

The construction of the arc is largely being funded by the John Cockerill Foundation, a philanthropic arm of the mechanical engineering company based in Seraing, Belgium.

Venet has been described by Forbes magazine as one of France’s greatest living artists. “My goal is to free sculpture from the constraints of composition and to criticise the utopian principle of an ideal order,” he said last year.

The artistic vision may be lost on some motorists. Until mid-October, only one lane will be open for those coming to Belgium from Luxembourg and the road is to be completely closed to traffic on the evening of the sculpture’s installation.

Read more:   Maradona's lawyer announces cause of death of star

Véronique Sorlet, a spokeswoman for the John Cockerill Foundation said: “The assembly has several phases including welding the three elements of the great arc.

“Then we have to carry out the ad hoc checks and install the ‘dynamic damper’, which reduces the natural vibratory movement.

“Finally, a final sanding operation will take place to standardise the [sculpture] at the same time as the earthworks to restore the site. We should have finished all this by the beginning of October.”

In 2016, Venet built a 20-metre-high arc at a roundabout in Bonn, Germany, in 2016, entitled ARC ’89, to commemorate the fall of the Berlin Wall and Germany’s reunification. A temporary 22-metre-high arc by Venet was also installed near the Palace of Versailles in 2011 in the face of some criticism.

The tallest monument in the world, at 182 metres high, is believed to be a statue of India’s first deputy prime minister, Sardar Vallabhbhai Patel in Gujrat.