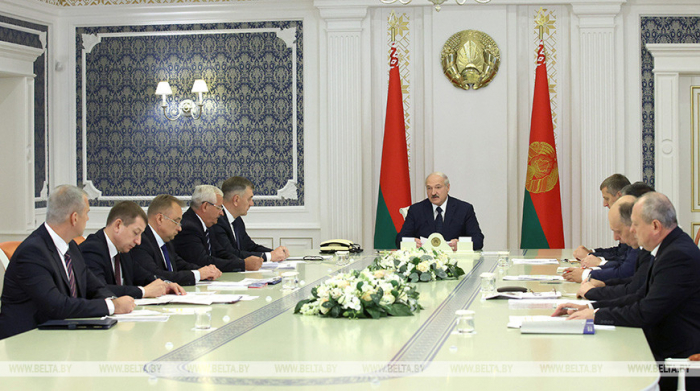 At a meeting in Minsk on 27 August, Belarus President Aleksandr Lukashenko said that he is ready to engage in a dialogue with labor and student collectives, BelTA reported.

The president stated that he is ready for a dialogue, including on the revision of the Constitution. The head of state is going to engage in this dialogue, first of all, with labor collectives and student teams. “If someone wants a dialogue, let it be. Student teams are the teams with whom I am ready to have a dialogue. The same about labor collectives (I have already said about it before). Please, choose your representatives and we will maintain a dialogue. Everyone wants a new political system. I do not mind, let us start from the Constitution; put forward your proposals and we will write a new Constitution, the fundamental law of any country. Everything should be based on the Constitution,” the head of state said.

“Therefore, let us sit down at the negotiating table. I mean representatives of all labor collectives, student teams (this is a future elite of our country, they should be involved in this dialogue). This also pertains to labor collectives that keep working in spite of anything. Peasants should also have a say; blue-collar and white-collar workers also want it, as well as doctors and teachers, not dissolute youngsters rambling the streets and shouting that they want a dialogue. In fact, they do not want any dialogue. None of the officials will negotiate with the street,” the president said.

“This is my clear view of and statement on the dialogue and on those with whom we can have it. If opposition has some sensible people who see their country free and independent, go ahead, speak your mind, but not on the street. There will be no dialogue in Belarus under the pressure from the street,” the head of state noted.

Aleksandr Lukashenko also gave his take on political calls on students on the part of those who are trying to destabilize the situation in the country. “They are trying to goad students into political action calling them to take to the streets on 1 September and so on. We will convey the necessary information to students and administrations of higher learning institutions. After all, the latter are responsible for the situation in their universities and they will be held to account, just like heads of industrial enterprises,” the head of state said.

“And then, you should keep in mind that guys were given draft deferment to enable them to study at university. If they do not want to study, they should defend the Motherland instead. Our Fatherland is in peril,” the Belarusian leader said.

“The defense minister asked me to let him enlist students who do not want to study. I said: students have not even returned to school, therefore this matter is premature. However, this is one of the options. What is illegal of unfair about it?” the president said.