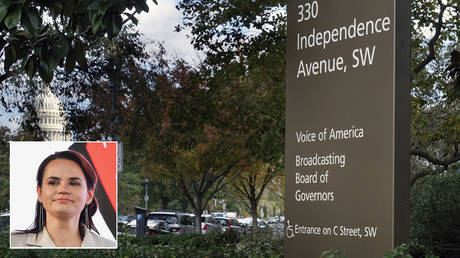 America’s state-run media giant has reportedly been asked by opposition figurehead Svetlana Tikhanovskaya to expand its operations in Belarus as part of a renewed effort to oust the Eastern European country’s embattled leader.

In a statement issued on Thursday, the activist, who fled abroad after last summer’s disputed presidential elections, said that she had “a fruitful meeting with the US Agency for Global Media’s CEO, Kelu Chao.” Chao oversees state-run media brands including Voice of America and RFERL.

Tikhanovskaya thanked those organizations for supportive coverage of the opposition in Belarus, and called upon them to “help repressed media in Belarus.” In addition, she asked Chao to commit to re-launching Voice of America’s service in the country. (RT)