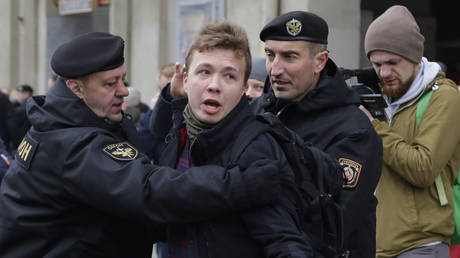 Belarusian state TV has aired a so-called confession interview with Roman Protasevich, the formerly exiled activist jailed after his plane was forcefully grounded in Minsk last month. His allies are calling it a “hostage” video.

Protasevich appears to have been coerced to confess under threat of deportation to the unrecognized Lugansk People’s Republic (LPR), in the east of Ukraine, where he is wanted for alleged participation in combat operations in Donbass during the 2014 war. Multiple photos and videos have emerged from the region showing the activist alongside the neo-Nazi Azov battalion, deemed by the LPR to be a terrorist organization.

“The only thing I hope is that [President] Alexander Grigorievich [Lukashenko] has enough political will and enough determination not to extradite me,” Protasevich said in the broadcast. He also praised Lukashenko in a manner at odds with his previous attitude to the embattled long-time Belarusian leader. (RT)