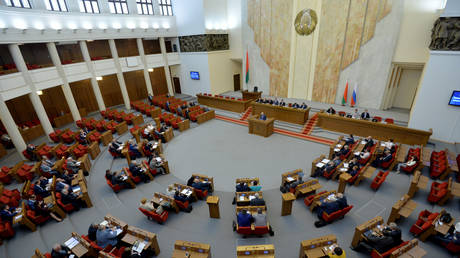 FILE PHOTO: Participants of the fiftieth anniversary session of the Parliamentary Assembly of the Union of Russia and Belarus in the oval meeting room of the Belarusian Parliament in Minsk. © Sputnik / Viktor Tolochko

With the world turning against Belarus’ administration, the country’s multilateral foreign policy is no longer in line with its objectives, according to the chairman of Minsk’s parliamentary commission on International Affairs.

Andrei Savinykh believes that the rapidly changing situation in Belarus and the deterioration of the government’s relationship with the West means that the country should officially pivot east and focus on improving its ties with Russia, and other Eastern states. (RT)