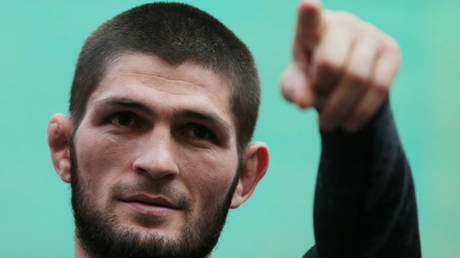 Khabib Nurmagomedov’s father Abdulmanap says Belarus, which is currently one of the only places in the world where major sporting events are still being held with the government’s blessing, is a leading candidate to host UFC 249.

Belarus is among the “best options” to host the imperiled MMA fight between Khabib Nurmagomedov and Tony Ferguson on April 18, Khabib’s father, Abdulmanap, has admitted.

Organizers are scrambling to find a venue for the lightweight title showdown, in which Khabib is set to defend his lightweight title against the American in the highest profile forthcoming sporting event yet to have been called off amid the coronavirus pandemic.

Thanking president Alexander Lukashenko, who hit the headlines this week by encouraging people to drink vodka, visit saunas and play ice hockey in the face of the deadly virus, Nurmagomedov senior suggested Belarus was under consideration to put on UFC 249.

“Why not consider this country?” Nurmagomedov asked, speaking to Sports Express after news broke of an improbable move by Russia’s Federal Air Transport Agency to fly Khabib on a private jet to a fight in the US, where international flights have been all but grounded.

“We are getting ready. I think this is one of the best options.”

Belarus has gained notoriety as the only country in Europe still hosting professional football matches, leading to a surge in interest as sports fans desperate to watch live action have turned their attention to the little-known Belarusian Premier League.

Despite Lukashenko’s ebullient attempts to downplay public health fears, serious concerns have been expressed over sporting attempts taking place in the country, including a new warning from the football world players’ union that the continuation of events there was “frankly not comprehendible.”

Nurmagomedov added that the champion’s team “wanted” Abu Dhabi and had been “offered” Kazan, Yekaterinburg and Moscow as host cities for the fight, conceding: “I do not know what will happen.”

Ferguson, who has seen scheduled fights against Khabib called off four times, used social media to claim his opponent had been “sent many locations” for their meeting, but remained “hiding in Russia”.

Also on rt.com Frozen out: Khabib Nurmagomedov says he’s stuck in Russia and UFC 249 could move on WITHOUT HIM

Rivals Dustin Poirier and Jorge Masvidal have both publicly offered to step in should Khabib remain in his native Dagestan.

UFC president Dana White is insistent that the card will go ahead. It was originally scheduled for New York, where the pandemic has already resulted in more than 4,000 deaths despite a lockdown.

“This fight is going to happen – no crowd, whatever it takes,” he pledged on ESPN.

“It’s probably not even going to be in the United States but this fight’s going to happen.”

The UFC’s next three events, aside from UFC 249, have all been postponed as a result of government guidance regarding crowds in order to limit the spread of the virus.

“They’re saying there should be no more than 10 in a room and that’s impossible,” White said.