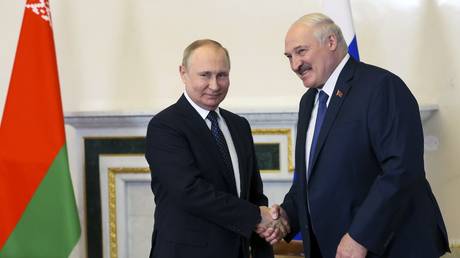 The idea of nuclear weapons deployment was inspired by a similar approach by Poland to the US, President Lukashenko said © AP / Pool Sputnik Kremlin

The idea of returning nuclear weapons to Belarus was prompted by Poland’s wish to deploy atomic weapons from the US on its territory, Belarusian President Alexander Lukashenko explained on Saturday.

“This topic with the President of Russia appeared after the Poles turned to the Americans and asked them to bring nuclear weapons to Poland. Then I told President Putin: ‘Why are we pretending that nothing is happening?’” Lukashenko said in his Independence Day speech in Minsk, the nation’s capital.

Lukashenko explained that his talks with Putin on the matter should not be considered as “nuclear blackmail.” He claimed that the conclusion that Minsk should be able to provide a reciprocal response to potential hostile action “within 24 hours” came after a long period of consultations. “To do this, we need to prepare. And we will prepare. We do not threaten anyone, we do not blackmail anyone,” he said. (RT)