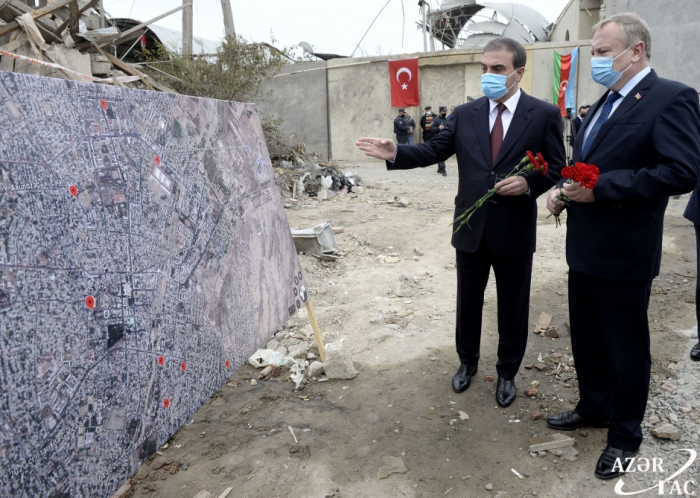 Ambassador of Belarus to Azerbaijan Gennady Akhramovich has visited the city of Ganja, according to AzerTag.

The visit aims to acquaint with the Armenian atrocities – crime scenes of Armenian armed forces’ reckless missile attacks against innocent civilians in Ganja, the second largest city of Azerbaijan.

Armenian armed forces continue to subject to heavy artillery fire the residential settlements of Azerbaijan, violating the norms and principles of international law, the 1949 Geneva Conventions and their Additional Protocols, as well as the agreement on humanitarian ceasefire regime which was signed on their persistent requests following the meeting in Moscow.

As a result of the Armenian army’s missile attack on Ganja on October 11, 10 civilians, including 5 women were killed. Moreover, 34 civilians, including 10 women and 9 minors were wounded. On October 17, 14 civilians were killed, more than 50 civilians were injured as a result of a rocket attack on the central part of Ganja. Numerous civilian facilities and vehicles were severely damaged. Among the dead and injured were minors, women and the elderly.

On October 27, the Armenian armed forces targeted civilian population of Azerbaijan’s Barda district and fired banned cluster missiles to civilians. As a result of cluster missile attack 4 civilians, including a seven-year-old child were killed, while dozens of others were wounded.

The attacks on densely populated areas with “Tochka-U”, “Smerch”, “Scud” and other missiles are aimed at killing a large number of people. Purposeful targeting of civilians is a crime against humanity.