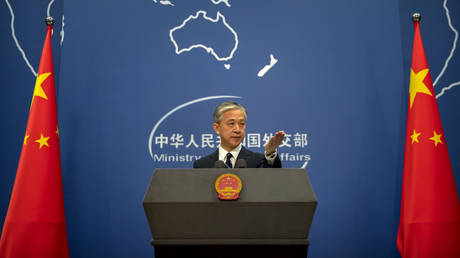 A US congressional delegation’s two-day trip to Taiwan that started on Sunday is at odds with the ‘One China’ policy and violates Chinese territorial integrity, the Chinese Foreign Ministry claimed on Monday.

“This is a blatant violation of the ‘One China’ principle and the provisions of the joint Sino-American communiques and Chinese sovereignty and territorial integrity. In addition, it sends a wrong signal to the separatist forces in Taiwan,” Wang Wenbin, the spokesman for the Foreign Ministry, told reporters.

Wang also urged the US to adhere to the ‘One China’ principle in order to avoid “inflicting even more damage” to relations between Washington and Beijing. He added that the Chinese people seek “national reunification,” describing it as a “historic trend that could not be stopped.” (RT)