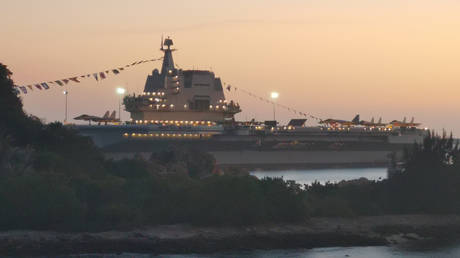 China has dispatched an aircraft carrier strike group into the disputed South China Sea for “routine” drills. The deployment comes shortly after another Chinese carrier group left the troubled region.

The group, led by the country’s second aircraft carrier, the Shandong, is to take part in “routine” training scheduled in its annual work plan, the People’s Liberation Army (PLA) Navy said in a statement on Sunday.

“It is completely legitimate and beneficial in improving the country’s ability to uphold national sovereignty and security,” a spokesman for the navy, Gao Xiucheng, has said.

The Shandong is the newer of two currently operational Chinese aircraft carriers. Launched in 2017, it entered service in late 2019. The deployment of the carrier strike group is its first major exercise this year.

The deployment comes shortly after another Chinese carrier group, led by the Liaoning aircraft carrier, left the region. The group held exercises in both the Western Pacific and South China Sea. (RT)