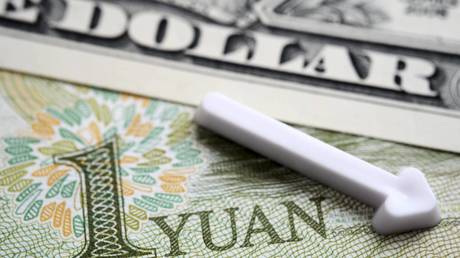 The Chinese authorities are reportedly striving to shore up the yuan © Global Look Press / Christian Ohde, via www.imago-im

China has told state-run financial institutions to prepare to sell off their dollar holdings while stocking up on offshore yuan, as Beijing tries to bolster the national currency, Reuters reported on Thursday, citing sources with knowledge of the matter.

The simultaneous dumping of the US dollar and purchasing of the yuan are expected to avoid further drops in the Chinese currency, which is currently on track for the biggest annual loss versus the greenback in nearly three decades. So far this year, the yuan has dropped over 11% against the dollar.

The unnamed source told the agency that the scale of this round of dollar selling to defend the weakening yuan is expected to be “rather big.”

China’s offshore yuan, which moves in lockstep with onshore yuan, saw a rebound of around 200 pips on the news. The trading volumes of offshore yuan account for about 70% of all yuan FX trades globally, dwarfing the volumes traded on the mainland.

The intervention scheme reportedly involved primarily using state lenders’ dollar reserves, while the total amount of selling is yet to be determined, since moves in the Chinese currency typically depend on dollar movements and the tightening policies pursued by the US central bank.

In 2015, the Chinese authorities burned through $1 trillion of its official FX reserves to support the yuan after a one-off devaluation of 2%, which roiled global financial markets.

Earlier this week, Beijing ordered China’s local banks to revive a yuan fixing tool that was abandoned two years ago, as the monetary authorities tried to steer and defend the weakening currency.

Read more:   Over 290,000 tons of cotton harvested in Azerbaijan to date