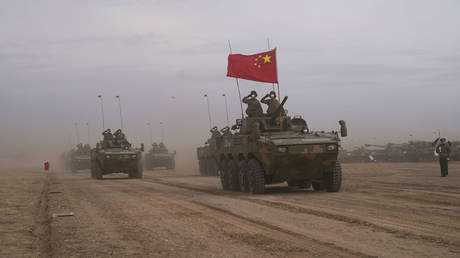 Chinese troops will be among the foreign participants at a multilateral military exercise in Russia called Vostok 2022, China’s Defense Ministry confirmed on Wednesday.

The People’s Liberation Army will send personnel to Russia, expecting the event to “deepen pragmatic and friendly cooperation with the militaries of the participating countries, enhance the level of strategic coordination among the parties, and enhance the ability to deal with various security threats,” a statement said. Beijing noted that current regional and international tensions did not affect its decision.

Vostok 2022 will take place at 13 locations in eastern Russia between August 30 and September 5, the Russian Defense Ministry announced in late July. It said foreign militaries were invited, but did not specify nationalities. The Chinese statement mentioned Belarus, India, Mongolia and Tajikistan among the guests.

Moscow conducts a strategic exercise of this kind once a year, with one of Russia’s five military districts picked to host it. In 2021, the Zapad maneuvers were held in the west of the country, together with Russian ally Belarus, while in 2020 the Kavkaz exercise took place in the south, with nations like Armenia, Iran and Pakistan participating.

Read more:   Trump-Kim 'personal feelings' are not enough for restarting talks with US – N. Korea

The last event in the eastern military district took place in September 2018. Chinese and Mongolian troops were involved in the Russian maneuvers at that time. (RT)