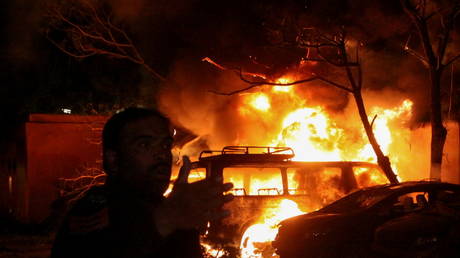 A police officer reacts after an explosion at a luxury hotel in Quetta, Pakistan April 21, 2021 © REUTERS/Stringer

The Chinese foreign minister said they have not received any reports that their citizens were hurt after a car bomb ripped through a hotel where the ambassador to Pakistan was staying but called on Islamabad to carry out justice.

Speaking on Thursday, Foreign Ministry spokesman Wang Wenbin confirmed that the Chinese ambassador to Pakistan, Nong Rong, was leading a delegation to the area on Wednesday but was not in the hotel when the terrorist attack took place. “When the attack occurred, the delegation was not in the hotel as they were participating in activities.” (RT)