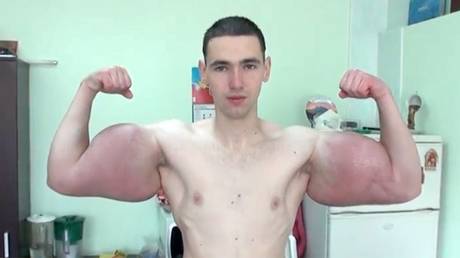 Kirill Tereshin, an MMA fighter whose artificially enhanced biceps have earned him the nickname ‘Popeye’, has begun receiving treatment to remove his fake muscles amid doctor warnings that they could kill him.

Tereshin, who was also known as ‘Bazooka Arms’, became something of a viral sensation this year after footage of the 23-year-old’s outrageously swollen arms traversed the internet but the former army recruit’s 15 minutes of fame look to be coming to an end after he has heeded medical advice to remove the vaseline jelly-like substance from his upper arms or else risk amputation, or even death.

Surgeon Dmitry Melnikov revealed that Tereshin had injected the up to three liters of the substance – and not synthol as previously claimed – to achieve the illusion of giant biceps but was urged by botched plastic surgery campaigner Alana Mamaeva to seek treatment.

Read more:   US 'not relying on Russia anymore' & keeping China on the outside

Mamaeva raised funds for the procedure and was present for the first stages of it.

“I am ready, I am even not afraid,” Tereshin told Mamaeva, per The Mirror, but outlined that he did not have the necessary funds required but Mamaeva pleaded with online donators that “we are going to try and help this young man.”

Dr. Melnikov outlined that the surgery is a difficult one but that significant inroads had been made in their initial treatment.