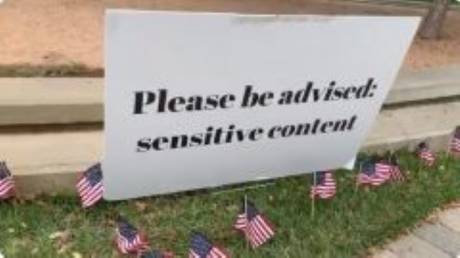 Baylor University administrators found it necessary to add a trigger warning to an annual September 11 memorial that is displayed on campus each year, suggesting that remembrance of the 2001 attacks is no longer a unifying cause.

The prestigious Christian university in Texas placed signs saying “Please be advised: sensitive content,” near the memorial, which features 2,977 small American flags lining Baylor’s Fountain Mall walkway to honor the people who were killed in the terror attacks.

Also on rt.com University of Rhode Island to take down murals of WWII-era class because they lack DIVERSITY

“These signs amount to nothing short of a trigger warning for an event that should unite all Americans,” said Baylor’s Young Conservatives of Texas student club, which sets up the memorial each year.

The club demanded Friday that the university formally apologize. “This is incredibly saddening for us to see,” the group said. “9/11 is a day that we can forget our political identities and come together to remember those who died and celebrate the triumph of our nation over evil.”

The university issued a statement Friday night saying it apologizes for “any misunderstanding” its decision may have caused. But the trigger warning was just what it appeared to be. Baylor said that realizing the “wide range of emotions” that could be evoked by the flag display, signs were placed nearby to notify passers-by of its “potential impact.” Such warnings are now considered for outdoor displays under rules that went into effect last year “based on feedback from our campus community,” the administration added.

We fully support the 9/11 display of American flags, regret that the signage we used has taken away from the intent of the display, and apologize for any misunderstanding this may have caused. pic.twitter.com/j758QEyUKQ

One observer on Twitter said the university’s response showed that it was trying to warn people away from an evocative display when the purpose of the memorial was to compel students to confront the emotions it evokes. Others agreed, saying September 11 should evoke “sensitive” memories. “The apology is almost as bad as the signs,” one netizen tweeted. (RT)