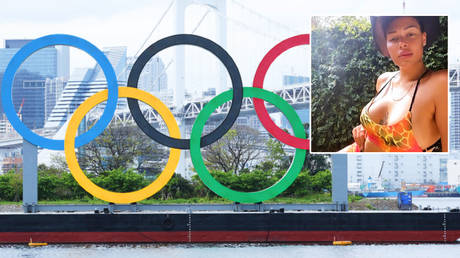 A bizarre row has broken out after Australian basketball player Liz Cambage threatened to boycott the Olympic Games over a photo set, complaining that the shots meant her country “doesn’t represent me” and had been “whitewashed” .

2012 Olympics bronze medalist Cambage is furious with what she perceives as a lack of diversity in a promotional series released by the Australian Olympic Committee (AOC), who said more should have been done to reflect the backgrounds of the whole team after failing to feature any athletes of color in the photos.

Cambage, a three-time All-Star in the Women’s National Basketball Association in the US, has also ignited fury by bafflingly appearing to single out Indigenous rugby sevens player Maurice Longbottom, writing that “fake tan doesn’t equal diversity” in an apparent reference to skin color that has mystified many.

“If I’ve said it once, I’ve said it a million times,” raged Cambage on Instagram, accompanying her words with the pictures of the team in official apparel before breaking into capital letters in an accusatory tirade that included the hashtag “whitewashed Australia”.

If I’ve said it once. I’ve said it a million times: HOW AM I MEANT TO REPRESENT A COUNTRY THAT DOESN’T EVEN REPRESENT ME- Liz Cambage Australian Basketballer #BlackLivesMatterpic.twitter.com/1j5vjISuQV

“How am I meant to represent a country that doesn’t even represent me?”

The Las Vegas Aces center, born in London to a Nigerian father and an Australian mother, used a follow-up post to say she was shunning this summer’s scheduled showpiece.

“Y’all really do anything to remove POCs [people of colour] from the forefront when it’s black athletes leading the pack,” she alleged, before finishing with a photo of indigenous Aussie sprinter Cathy Freedman winning 400m gold at the the 2000 Olympic Games in Sydney.

“Until I see you doing more, [Australian Olympic team], I’m going to sit this one out.”

Responding in a statement, the AOC acknowledged Cambage’s “point with regard to this particular photo shoot” and added that it had a history “of celebrating and promoting diversity”.

“We proudly defend our track record on diversity and there will be further photoshoots that reflect our broad diversity of athletes,” it said.

Australia’s most successful women’s basketball boss, Tom Maher, disagreed with Cambage’s stance. “It is inappropriate to make such a big deal out of pretty much nothing,” said the coach who guided the team at the 1996 and 2000 Games, speaking to the Telegraph.

As an openly black American I can’t even fathom being a person of color in Australia. I fully support @ecambage because until I saw her, I didn’t even know there were black Australians. It’s like they’re hiding them or something.

You need to get out more seriously

“There have been no bad intentions [in the photos]. Was there a homosexual athlete represented? Was there a Chinese Australian athlete mentioned? I mean, where does it end?

“If I was coach, I wouldn’t entertain any threats at all. If she wants to come, she can come, but if she told me she was going to boycott I’d say, ‘Good luck, see you later’.

She just seems like the most unpleasant, self indulgent person.

For someone who spruiks a lot about Mental Health. Liz Cambage seems to show a lot of disregard when it comes to others.

“She is a great player but the issues need to be attended to in the right environment. Right now, if you are an Olympian, you could make the protest without making the threat. That would be a more appropriate way of dealing with it.”

There were some shows of support for Cambage on social media. “As an openly black American, I can’t even fathom being a person of color in Australia,” said one.

“I fully support [her] because until I saw her, I didn’t even know there were black Australians. It’s like they’re hiding them or something.”

I can’t understand why she isn’t coping it for the fake tan comment about an indigenous athlete.

Liz Cambage accusing an indigenous athlete of just having fake tan is not something I saw coming.

That view was in the minority. “Australia is 85 percent white,” said one reader. “This is almost like complaining about a photo of Chinese Olympians and complaining there aren’t enough caucasians in the image.”

Others said Cambage was seeking attention and criticized her for disregarding others on her team. “It’s not the fault of those chosen in the picture that it was used,” said one.

Liz Cambage accusing an indigenous athlete of wearing fake tan could possibly be her worst take since she supported the “Free Melbourne” campaign whilst in the US..

Great comment. Not the fault of those chosen in the picture that was used & unnecessary angst to them in what should be a high point in their lives.What concerns me is Liz didn’t believe she could speak to AOC officials privately about this,instead putting it on social media?

“This is unnecessary angst for them during what should be a high point in their lives. What concerns me is why Liz didn’t believe she could speak to AOC officials privately about this, instead putting it on social media?”

Cambage used a video last year to attack Australians for ignoring problems in their country while discussing the killing of George Floyd in the US.

The 29-year-old has appeared at the last two Olympic Games and is also a DJ and model for artist pop superstar Rihanna’s lingerie line.