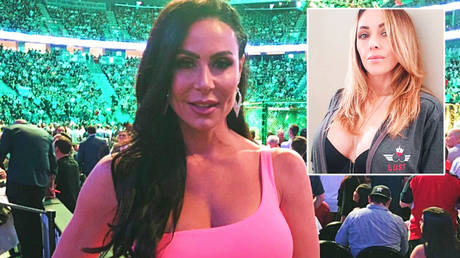 As one of the most popular adult actresses in the world with decades of work behind her, presenter and gym-goer Lust is likely to have earned well during her prolific career – and that appears to have put her in a position to offer financial support to one star.

Like Lust and VanZant, BJJ Black Belt Charisa Sigala is not shy of a scantily-clad snap on social media to titilate her large following.

The mother-of-three fought on the undercard of VanZant’s debut loss against Britain Hart in February and spoke beforehand of potentially meeting the newcomer in a future fight.

Despite an impressive level of popularity that has earned the beauty almost 35,000 followers on Instagram, Sigala is yet to rack up the millions of devotees who make the platform such a lucrative business for Lust and VanZant.

Even when she was in the UFC, VanZant spoke about the considerable expenses involved in training camps for fights and acknowledged that she made far more money from her skin-baring online exploits than she does from fighting.

The lack of that added income to call upon may explain why Sigala’s new-found support from Lust is vital to the veteran.

“Very happy and grateful to announce that Kendra Lust jumped on board to sponsor my next fight,” the Californian announced, wearing tops branded with the entertainer’s surname.

“I can’t wait to represent Lust Army very soon. Thank you for all you are doing for women in combat sports.”

Sigala does have some extra-curricular activities that supplement her fighting fund. One of them is a website under her nickname, Charisa Sweetheart, offering “exclusive content” to subscribers.

“You won’t be disappointed,” she tells them by way of introduction, offering the chance to access her posts for $9.99 a month. “I read and respond to your messages.”

The strawweight also directs fans to an Amazon wishlist where they can buy her gifts ranging from speed bags and exercise balls to plunging lace bodysuits and daring nipple covers.

Most of the items reflect the scale of her fight training, including body composition monitors, massage tables and, among the most expensive potential presents, a $325 set of light pods to “improve reaction time, fitness, speed and agility.”

After losing on a decision to another internet phenomenon in her last outing – former UFC fighter Pearl Gonzalez – Sigala will hope to return to winning ways with the help of her fresh backing.

By then, she will have gone more than five years without a win after four straight defeats, losing twice on MMA promotion Combate before being edged out in her first two fights for BKFC, both of which have taken place this year. (RT)