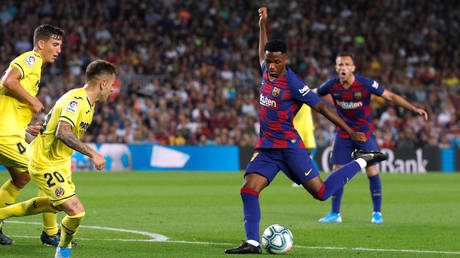 Ansu Fati has been linked with a transfer from Barcelona © Reuters

Barcelona have reportedly turned down a colossal bid for forward prodigy Ansu Fati, who overtook Lionel Messi to become Barcelona’s youngest ever goalscorer as a 16-year-old and has shattered several scoring records since.

The La Liga leaders have rejected an offer of around $112 million for their homegrown sensation who became their youngest ever scorer in the Spanish top division, according to reports naming a “European heavyweight club” as the bidders.

Embattled club president Josep Maria Bartomeu is said to have insisted that Fati will not leave as the prospect of former star Neymar making his strongly-rumored return to the Camp Nou from Paris Saint-Germain becomes increasingly unlikely.

Barcelona have faced financial pressure as a result of La Liga being suspended during the Covid-19 pandemic, agreeing a 70 percent pay cut with Fati, Messi and the rest of the squad during the enforced break that is expected to end with the planned resumption of fixtures next week.

Also on rt.com Who needs Messi? 17yo Fati strike sends Inter crashing out of UCL with THREE disallowed goals

Neymar is under contract at PSG until next year and would command a huge fee should the Spanish giants move for him before then, having set the record for the world’s most expensive transfer when he left Barca for France for around $246 million in 2017.

Speculation has been rife that Messi is one of the only players the club would not be open to selling, and even the one-club Argentinean’s future has been debated following his public row with sporting director Eric Abidal over the culpability of the squad for the sacking of former coach Ernesto Valverde in January.

With injury-plagued French forward Ousmane Dembele believed to be one of the strikers on the way out of the club, Barca are unlikely to sanction the imminent departure of Fati, who became their youngest ever player in the Champions League and the youngest scorer in the history of the competition earlier this season.

The scorer of five goals during the current campaign is seen as an eventual successor to 32-year-old Messi and is regarded as “untouchable” by Barcelona, AS has claimed. (RT)