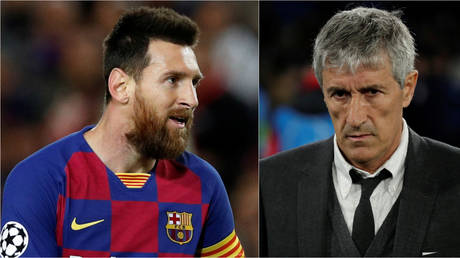 Lionel Messi believes that Champions League glory is out of the question for Barcelona under the style they have adopted this season with Quique Setien – but the icon’s new boss has rejected the idea of changing his ways.

Messi is pessimistic about the club’s chances of winning the most prestigious club competition in Europe should they retain the style which has seen them edge two points clear at the top of La Liga and draw at Napoli in the first leg of their Champions League Round of 16 tie.

Barca have conceded fewer goals per game since Setien replaced Ernesto Valverde in January but have only won one match by more than one goal while continuing their inconsistent away form.

“Coaching another way of playing would be very difficult for me,” Setien told a videoconference, responding to remarks from Messi that winning the Champions League with his current approach “is not possible.”

Read more:   US Senate to vote on ambassadors to Azerbaijan and Armenia

Also on rt.com ‘They’ve made a pandemic into business’: Barcelona BLASTED for selling $20 face masks as fans accuse club of cashing in on COVID

“Many matches are won and lost because of one-off situations. We’ve forgotten the show. We have to enjoy football.”

Setien and Messi will face a hectic schedule as Liga clubs scramble to conclude their schedules when football in Spain returns for the first time in two months on June 11.

“There will be lots of games in a short time,” said the coach. “The heat will have an influence on performance and it will affect injuries.

“We’re hoping that it does less damage than people think [it will]. It’s possible that there will be lots of injuries like in Germany, because we’ve spent almost two months sitting on the sofa, not playing.”

Setien surprisingly claimed that increasing the number of substitutes allowed during a match from three players to five could negatively impact Barca despite the relative depth of their squad.

“I think the [rule] is going to harm us because we’ve resolved many games in the final few minutes and our opponents will [now] have fresh legs,” he said.

The date of Barcelona’s Champions League second leg could depend on their league campaign being completed without any hitches as organizers pray that the coronavirus will not force further disruption.

“This break may end up benefiting us,” Messi predicted, speaking to Sport about his pursuit of his first Champions League trophy since 2015.

“Personally I am looking forward to the competitions. We know that everything is going to be weird without fans in the stadium…you have to see how it goes.” (RT)