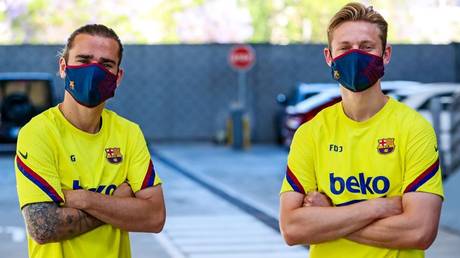 Barcelona fans are being given the chance to recreate the look of their heroes by buying replicas of masks that the club’s squad and coaching staff are wearing to training – but fans say the products are capitalizing on COVID-19.

While some of Barcelona’s European rivals have charged around a quarter of the price for masks, the reigning La Liga champions are asking for €18 (around $20) for each item, designed to protect against COVID-19 transmission.

Barca encouraged their vast global fanbase to buy the garments and provided a gallery of famous faces wearing the new masks, including major summer signings Frenkie De Jong and Antoine Griezmann standing opposite each other with their arms folded.

These are the first Barça masks with an exclusive design … Stay tuned! 💙❤️ pic.twitter.com/DXguL6lFpW

The club are advertising the organic cotton masks, which are available in two colours and a design sporting illustrations of the likes of Lionel Messi in action, as costing less than half a cent per usage if they are worn up to the recommended limit of 40 times.

Read more:   Nasa asks for applications to go to the Moon

After seeing footage of players scoring goals in the masks and a marketing message calling them “the best defense,” followers turned on the Champions League contenders’ attempts to promote their new merchandise on Twitter, which included a photo of star striker Messi training without a mask on Wednesday.

You use every situation to make money and buy useless players

“You use every situation to make money and buy useless players,” replied one cynic, while another added: “They have successfully turned a pandemic into a business.”

They have succesfully turned a pandemic into a business.

Some supporters suggested the masks were part of a desperate plan to make money at a club which made an estimated $912 million in revenue last year, making it the highest-earning football outfit in the world.

Barcelona will reportedly lose more than $110 million as a result of football being suspended during the pandemic, and many fans pointed out that the Spanish giants could be aiming to help fund a release clause fee of around the same amount for current transfer target Lautaro Martinez.

Fans can choose the Senyera colours of the flag of Catalonia or the blue and scarlet design of the club’s home kits, and the price remains the same for smaller masks to fit children and toddlers.

No mention was made of the apparent mark-up in price providing proceeds for any charitable causes, although Barcelona has been involved in efforts to help healthcare efforts during the crisis.

Also on rt.com Romanian footballers face 12-MATCH BAN for spitting or blowing noses on the pitch under plans to resume sport after COVID-19

Last month, the club revealed that the Barcelona Foundation would be putting money raised from selling next season’s naming rights to its famous Camp Nou home towards “research projects and the worldwide fight against the pandemic.”

At Premier League leaders Liverpool, who beat Barcelona in a remarkable Champions League semi-final last season, a pack of four masks are available in club colours for £16 (around $19), meaning each covering costs less than $5 before shipping.

The Reds are also encouraging fans who purchase the masks to distribute them to local causes, while Bundesliga club Dortmund have produced masks in their yellow colours for £5 each ($6).

Barcelona are not the first club to court controversy over club shop items relating to COVID-19. English club Portsmouth were forced to issue a statement last week explaining how the profits from the sale of club-branded masks, on sale for £10, would be spent. (RT)

Oil prices eased on Friday, reversing earlier gains, as the resurgence of the coronavirus globally…

Precious metal prices up in Azerbaijan on July 1

The price of gold increased in Azerbaijan on July 1 compared to the previous price, Trend reports…

Wind energy, biofuels or solar energy could be the potential spheres for cooperation between Poland…

Port of Baku operates another cargo freight from China to Turkey