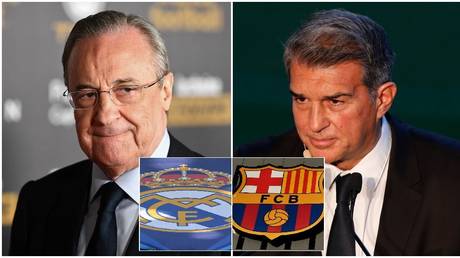 Once sworn enemies, La Liga giants FC Barcelona and Real Madrid are now brothers in arms – or rather, greed – as they refuse to give up on the failing European Super League.

Their rivalry began as something that was always about much more than football.

Though the autonomous region boasts other – these days lower league – outfits such as Espanyol and Girona, FC Barcelona are the pride and joy of Catalonia.

The club is a huge pillar of the culture locals desperately labor to preserve, as kids are taught in Catalan at schools, and all official correspondence from and within government bodies and entities is strictly conducted in the language spoken by over four million people.

On the other hand, Real Madrid are thought of as representing the king, the establishment, the mainland, and, during his near four-decade reign of terror – the infamous dictator General Francisco Franco.

During the Spanish Civil War, Barca president Josep Sunyol was shot dead by Franco’s troops, and once the tyrant was sworn in to power, the Blaugrana were forced to remove the Catalan flag from their badge and the speaking of Catalan, Galician and Basque became prohibited across Spain.

El Clasico as a fixture naturally increased in intensity. But as Franco favored Los Blancos, there was an uneven balance with the 11-1 hiding dished out in the Copa del Rey (then known as the Copa del Generalisimo) semi-final second leg in 1943 allegedly a consequence of police threatening to harm Barca’s players before kick-off.

In the 1950’s as Real Madrid became widely-know by their foes as ‘Franco’s team’ or the ‘Team of the Regime’, the dictator is also said to have meddled in the RFEF (Spanish FA) pushing the brakes on Barca’s purchase of Alfredo Di Stefano.

#OnThisDay – 18 May 1960Real Madrid won their 5th European Cup trophy in a row, A Record which is yet to be broken. Real Madrid reached the Final after beating Barcelona by 6-2 on Aggregate.Real Madrid 7-3 Eintracht Frankfurt⚽️⚽️⚽️⚽️ Ferenc Puskás⚽️⚽️⚽️ Di Stéfano pic.twitter.com/beT3LSAghA

With the Argentine then predictably winding up at the Bernabeu, an era of domestic and international dominance followed as the ‘Blond Arrow’ netted in all five consecutive European Cup final wins from 1955-1960.

The riches and prestige this brought helped lure other global stars such as Ferenc Puskas – who featured in the last two of those romps plus another in 1966 – and there was also an approach for Pele.

Meanwhile, Barca didn’t rise to the top of the continent until the early 1990s. And while they have never been short of a dollar or two in breaking the transfer world record for Diego Maradona in 1982 and Johan Cruyff in 1973, it was only through extracting the fruits of the Dutchman’s genius footballing mind that success among the two behemoths began to level out.

Restructuring the club’s entire philosophy from the ground up as first team manager, he promoted products from the academy such as Pep Guardiola and mixed them with compatriots including current coach Ronald Koeman to create a Dream Team that won four consecutive La Liga titles from 1991 to 1994.

Koeman, known in Catalonia during his playing days as Tintin, scored the clincher at Wembley against Sampdoria in ’92 when Barca got their hand on Ol’ Big Ears for the first time.

And though soundly beaten by AC Milan, they also reached the final again two years later and could count Ballon d’Or holder Hristo Stoichkov and World Cup winner Romario among their rank and file.

When Ronald Koeman hit them, they stayed very fucking hit. 239 goals in 685 career games for the defender, with this one — scored #OnThisDay in 1992 to win the European Cup final v Sampdoria at Wembley — his crowning achievement.pic.twitter.com/uXJxgtVLB2

The turn of the century saw the birth of the world’s most valuable napkin, when a young Lionel Messi and his father signed an agreement on said item to up sticks from Rosario and join La Masia.

The modern day captain’s coming of age at the end of the 2000s coincided perfectly with Cruyff disciple Guardiola’s as a master technician, and while Frank Riijkard and Luis Enrique were also responsible for two of the trophies, four Champions League crowns and countless Spanish spoils boosted Barca’s status to the world’s most valuable club.

As Madrid could also boast Messi’s generational rival Cristiano Ronaldo and Pep’s in Jose Mourinho at the height of the modern-day rivalry, El Clasico became much more than just Catalonia vs. Spain.

A Catalan independence movement and related referendums made a great racket in the background; as much as the near-100,000 capacity crowd acapella singing of the club’s hymn at high decibels above traditional senyera flag mosaics – in a show of nationalism some find hard to stomach.

But the clash was now primarily centered on the world’s best players, coaches and biggest fanbases locked in battle before global audiences of hundreds of millions with the highest quality of club football arguably ever seen on show.

With both outfits long aware of how to maximize their revenue – as seen through countless preseason tours to the US for a start – it is no surprise that was has finally united the once sworn enemies is money.

Joan Laporta, the master politician – knows Barça need the Super League finances, but doesn’t want to risk sullying his & his club’s reputation like Florentino Pérez has. And he’s played the ‘socios will have the final say’ card. Sitting on the fence, the oldest trick in the book https://t.co/4ERLyyK1mV

Now laughably the only two of 12 founding members left in the failing European Super League, they are hanging on to the dead project for dear life.

Making no mention of his intentions on the campaign trail to last month’s election, new Barca president Joan Laporta is exerting the trickiness and political cunning his detractors have long criticized him for.

Despite not consulting them ahead of Sunday’s bombshell announcement to break away from the Champions League, he is now putting the onus on socio club members to decide whether to join properly, or not, but backed plans yesterday when finally breaking his silence on the matter.

Club statement on the Super Leaguehttps://t.co/BFSgo1OaQo

“We had a position of prudence,” Laporta began, as a club statement was also released in the same afternoon.

“It’s a necessity, but the last word will be the socios’. The big clubs bring a lot of resources and we have to be able to give our point of view regarding the economic division [of funds],” he went on.

“The Super League has to be an attractive competition based on sporting merit. We are defenders of the domestic leagues and we are open to open dialogue with UEFA. We need more resources to make this a big spectacle,” Laporta explained.

“There has been pressure on some clubs but the proposal still exists. We make important investments, salaries are very high and all these considerations have to be taken into account in the same way as sporting merit,” he concluded.

Also on rt.com ‘So out of touch’: Elderly billionaire Real Madrid president Perez claims young people shun football and ‘in 2024 we are all dead’

Dropping his new partner-in-crime right in it, Real Madrid counterpart Florentino Perez claimed during his now infamous interview with El Chiringuito that Laporta needed little persuasion to join the Super League as his club are in “a bad situation and [he] knows that this is the future of Barcelona.”

With additional reports emerging that those who have backed out of the ESL must pay a $360 million fine, Laporta’s men cannot afford not to take part in the competition and much less drop out.

The penalty that must be handed over is also the sum that which would have been received by participants through the division of a $3.85 billion loan from JP Morgan.

And while Barca are mired in over $1 billion worth of debt, such a fee could help the cash-strapped Catalans lure the likes of Neymar back to the Camp Nou while joined by Erling Haaland and much-needed reinforcements further down the pitch.

Also on rt.com Barca ‘optimistic’ over Haaland transfer – but can they really dream of big names amid dire financial straits?

In early protests against ESL plans, Jurgen Klopp went on record in 2019 asking who wants to see Liverpool play Real Madrid “every year”, and the same logic can apply to oversaturation of El Clasico.

As much as admirers of the sport love it, the spectacle has declined in quality since Ronaldo fled to Juventus and Messi now gets on in years.

Seeing it up to eight times a season in La Liga, the Copa del Rey and the ESL would become tiring and take away its magic, with a cautionary tale found easily in Brazil’s jam-packed state and national playing calendar.

Sticking two fingers up to the rest, however, this is the hill that previously unlikely bedfellows have chosen to die on.