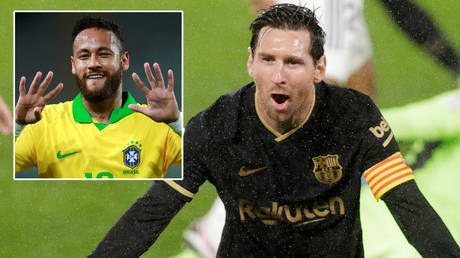 A vote will be held on renaming Barcelona’s Camp Nou home after Lionel Messi under bold plans drawn up by entrepreneur Emili Rousaud, who has said he will sign Neymar as one of two “top players” should he become club president.

The extraordinary idea means that Messi could have Barcelona’s stadium named after him before the end of this season if Rousaud is elected, renaming the club’s iconic ground for the first time since it was built in 1957.

Businessman Rousaud made the pledge in the same week as rumors again rang out that Barca’s all-time top scorer is ready to leave Catalonia, with Premier League giants Manchester City the frontrunners to lure him from the club where he has spent his entire career.

“We will hold a referendum to change the name of the stadium to Camp Nou – Leo Messi,” Rousaud told reporters, making his case for replacing hugely unpopular outgoing president Josep Maria Bartomeu in the elections in January.

📻 💬 Emili Rousaud on @ElTransistorOC “We are going to ask the members if they want the Camp Nou to be named after Messi because he is the player who has signed the brightest pages of this club. You do not have to wait for the retirement or death of a star to honor him.” pic.twitter.com/qWqTHtREAj

❗Emili Rousaud: “If Messi doesn’t cut his salary, we can’t renew with him.” pic.twitter.com/GPnzKIl8bl

🎙 Emili Rousaud (presidential candidate) “Neymar’s return? We are working to bring him back to Barcelona if he withdraws the lawsuit he has against the club. We propose that he return once his contract is over. The proposal is to rebuild the team in 2021 and 2022.” pic.twitter.com/tCQfBpPc7c

“I do this out of enthusiasm, commitment and experience. I want to rebuild the team, the club and the economy. I will give my skin to make Barca, once again, the best team in the world.”

Part of Rousaud’s reign would involve the return of Neymar, the Brazil striker who became the world’s most expensive player when he left the club for Paris St. Germain in 2017 and has since become embroiled in a legal battle with Barca over millions of dollars which he claims are owed to him.

Neymar has been repeatedly linked with a return to Spain despite the dispute, and is one of two huge signings that Rousaud has claimed to have lined up as he looks to win over voters.

“We’re going to sign two top players,” he revealed. “One of them is Neymar. We are working to bring him back to Barcelona if he withdraws the lawsuit he has against the club.

“We hope to be able to announce soon the name of the other big-name player we want to bring. It will not leave anyone indifferent. We have a direct line to the player.”

In comments that did not seem to bode well for new manager Ronald Koeman, Rousaud added that he wanted some of the stars of the club’s recent Champions League successes, including Xavi Hernandez, Andres Iniesta and Carles Puyol, to return and create “a strong link with the club, the team and [academy] La Masia.”

Koeman has presided over only three wins in eight Liga matches this season, leaving Barcelona languishing in 13th in the table and the coach’s future uncertain after Rousaud said he had approached a new technical director.

“We respect Koeman a lot,” he remarked. “But if he doesn’t continue, we have closed in on one [coach] who is active and training one of the best teams in Europe.

“We have the best technical director in place, but we cannot announce him yet because he is active [at another club].” (RT)