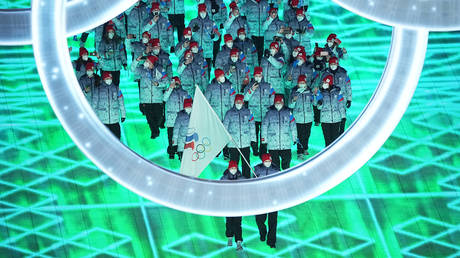 The Russian team pictured at the Winter Olympics in Beijing before sweeping bans were imposed. ©  Michael Kappeler / picture alliance via Getty Images

Reliable partners such as Russia are a rarity in world sport and imposing bans on the country can be compared with “suicide,” according to Russian Sports Minister Oleg Matytsin.

Russian athletes have been suspended from a wide range of sports following the onset of the military campaign in Ukraine, with Russia also being stripped of major sporting spectacles it was due to host.

Sports Minister Matytsin said that the sanctions had removed one of the most dependable organizers of large-scale events – much to the detriment of world sport.

“I’m sure that the world sports community is aware of the harm they have done to themselves by removing Russian athletes and depriving Russia of international tournaments,” Matytsin said at the forum ‘Russia – A Sporting Power’ in the city of Kemerovo on Thursday, according to RIA Novosti. 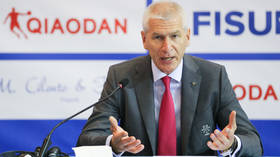 “Reliable partners such as Russia can be counted on the fingers of one hand. We’ve held a huge number of competitions at the highest level.

“You can compare the suspension (of Russia from competitions) with suicide. I hope that reason will prevail. We’ll definitely win,” Matytsin added.

Matytsin stressed that Russia remains open to dialogue with global sporting organizations, despite the sweeping bans imposed at the recommendation of the International Olympic Committee (IOC) at the end of February.

Russia has a proven track record of holding major sporting showpieces in recent years, including the likes of the 2014 Sochi Winter Olympics, the 2018 FIFA World Cup, and matches at the 2020 UEFA European Championship.

The current sanctions have meant Russia has been stripped of events such as the 2022 UEFA Champions League final, which was due to be held in St. Petersburg in May but was relocated to Paris, where it ended up being marred by ugly scenes involving football fans and local police.

The 2022 Volleyball Men’s World Championship was also relocated away from Russia, as were the men’s and junior 2023 World Ice Hockey Championships.

Matytsin noted earlier this month that various Russian sports federations were still seeking compensation from international governing bodies for the cancelation of events they were due to host. (RT)