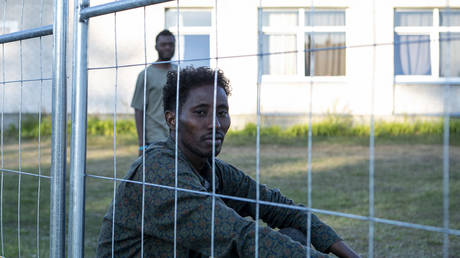 Lithuania has taken a racial and illegal approach towards refugees from Africa and the Middle East, who poured across its border with Belarus last year, Amnesty International said in a damning report on Monday. Adding that Brussels turned a blind eye to the violations.

Amnesty said it was concerned about “institutional racism embedded within Lithuania’s migration system” after discovering a sharp contrast between the treatment of Ukrainian refugees and those who came from other parts of the world.

“While Lithuania has rightly extended a warm welcome to tens of thousands of people fleeing Ukraine, the experience of the detainees we spoke with could not be more different,” Nils Muiznieks, Europe Regional Director of Amnesty International, said. “This raises serious concerns about institutional racism embedded within Lithuania’s migration system.”

The 65-page report titled “Lithuania: Forced Out or Locked Up” is based on interviews with dozens of people that came from countries including Cameroon, the Democratic Republic of Congo, Iraq, Nigeria, Syria and Sri Lanka. Amnesty said it visited two centers for migrants which were effectively prisons.

The human rights watchdog said it received “numerous reports of ill-treatment, some amounting to torture, and disproportionate use of force” by guards at the two facilities. Detainees complained about being beaten with batons, subjected to taser shocks and bitten by guard dogs. One woman from Sub-Saharan Africa said guards threatened to send her into the forest and hunt her down. (RT)