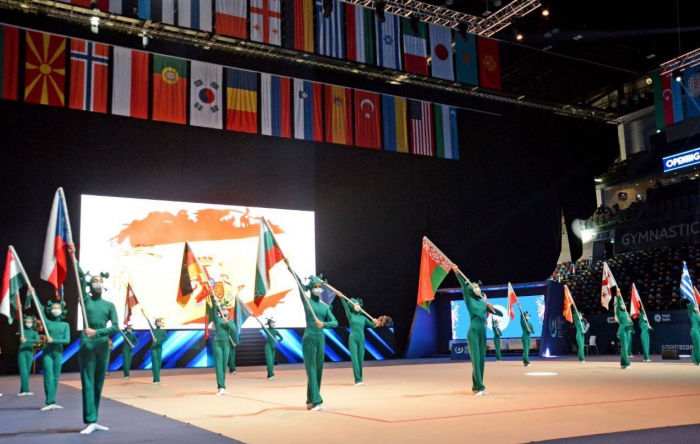 The opening ceremony of the Rhythmic Gymnastics World Cup has been held at the National Gymnastics Arena in Baku on May 7.

During the ceremony, the flags of the countries participating in the World Cup were brought to the arena hall.

The participants of the event honored the memory of the Minister of Youth and Sports of Azerbaijan, Azad Rahimov, who died on April 30, 2021. A large screen installed in the hall of the National Gymnastics Arena showed photographs of Azad Rahimov, taken during his visit to competitions and training gymnasts.

The National Anthem of Azerbaijan was played at the opening ceremony.

The Rhythmic Gymnastics World Cup, which is being held in the capital of Azerbaijan on May 7-9, has a qualifying character for the Olympic Games in Tokyo. Nearly 170 gymnasts from 35 countries of the world are taking part in the World Cup in Baku.

Azerbaijan is represented by Zohra Agamirova and Arzu Jalilova at the competition in the individual program. In group exercises for the country, the team will consist of Laman Alimuradova, Zeynab Gummatova, Elizaveta Luzan, Maryam Safarova, and Daria Sorokina.

Traditionally, a gymnast and the team with the highest number of performance points during the competition will be awarded the AGFTrophy Cup. The competitions are held in accordance with the quarantine measures in force in the country, given the sanitary and epidemiological requirements and without the participation of spectators.