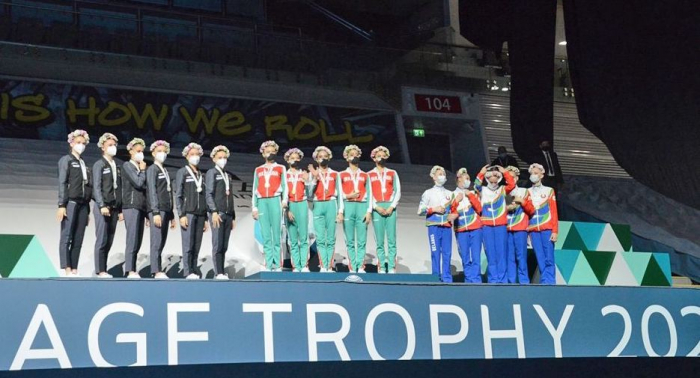 An award ceremony was held for group teams and gymnasts following the all-around competitions as part of the Rhythmic Gymnastics World Cup at the National Gymnastics Arena in Baku, according to the Azerbaijan Gymnastics Federation (AGF).

Russia’s Daria Trubnikova ranked first in the all-around competitions, gymnast from Bulgaria Boryana Kaleyn ranked second, while Russia’s Lala Kramarenko ranked third. An interesting moment of the awards ceremony was that the medals were awarded to the gymnasts via a drone.

The special prize of the Azerbaijan Gymnastics Federation – AGFTrophy – for the highest performance score was also presented. Israeli gymnast Linoy Ashram received the prize. Among the group teams, the national team of Bulgaria was awarded the prize.

Read more:   Azerbaijan to use blockchain technology to regulate relations between banks, customers

The Rhythmic Gymnastics World Cup, which is being held in the capital of Azerbaijan on May 7-9, has a qualifying character for the Olympic Games in Tokyo. Nearly 170 gymnasts from 35 countries of the world are taking part in the World Cup in Baku.

Azerbaijan is represented by Zohra Aghamirova and Arzu Jalilova at the competition in the individual program. In group exercises for the country, the team will consist of Lyaman Alimuradova, Zeynab Hummatova, Yelyzaveta Luzan, Maryam Safarova and Darya Sorokina.

The competitions are held in accordance with the quarantine measures in force in the country, given the sanitary and epidemiological requirements and without the participation of spectators.